Sen. Phil Berger is playing politician again. In this election year, he and his GOP comrades have ramped up their “strong talk” on their commitment to adequately fund public schools and pay teachers a comparable salary on the national level.

And part of his talk is defending himself against the vicious attacks from those who do not agree with his actions surrounding public education these past five-six years. His office stated this week when introducing measures to raise teacher pay,

“Democrats, teachers unions and liberal editorial boards have made teacher pay and school funding their political rallying cry since Republicans won control of the state House and Senate in 2010 – accusing the conservative majorities of starving public schools and short-changing educators. They often cite national union rankings that leave North Carolina in the low 40s in teacher pay.

But comparing even the current teacher salaries to the old plan Democrats left in the wake of a $2.5 billion budget deficit tells a different story. Over the past two years, legislative leaders and Governor McCrory partnered to pass a significant raise that lifted starting teacher pay from $30,000 to $35,000. The Senate plan announced Wednesday was an even more devastating blow to the liberal mindmeld – it could move North Carolina as many as 23 spots in the same teacher pay rankings.”

Ironically, this statement pretty much proves the politicizing of something that should never be politicized – public education. Words like “Democrats”, “unions”, “liberal”, and the Spock-inspired “mindmeld” are pointed diction. Blaming national union rankings that are considered to be the standard across the nation is funny when you claim your plan would be a success using the very same rankings. Talking about a budget deficit as if it did not happen to all states because of the Great Recession is generalizing a much more complicated issue. But it is expected.

So what is the actual plan?

A website appeared on the landscape this week that adds even more shade to an already shady proposition. Here is the home page for www.ncteacherraise.com. Notice it has the red, white, and blue of the American Flag or the colors of the new “America” Beer once known as Budweiser.

A few questions/concerns pop into my head when first looking at this patriotic website. The first is the banner at the top, “Attracting Excellent Teachers. Building Excellent Public Schools.” Nothing could be more antithetical to the truth.

In reality, it should say, “Spurning Excellent Teachers. Razing Excellent Public Schools.” Why? Because the very same NC GOP party that created this website also has done or enabled the following in the last three years:

The second and more glaring aspect of this website is the need for anyone to have to place a name, email, and zip code in the fields in order to get any information – information that should not have any strings attached to it in order to access it.

Why would anyone have to give personal information to hear about this? Well, I did with generic information. The zip code is the one for the NC General Assembly. 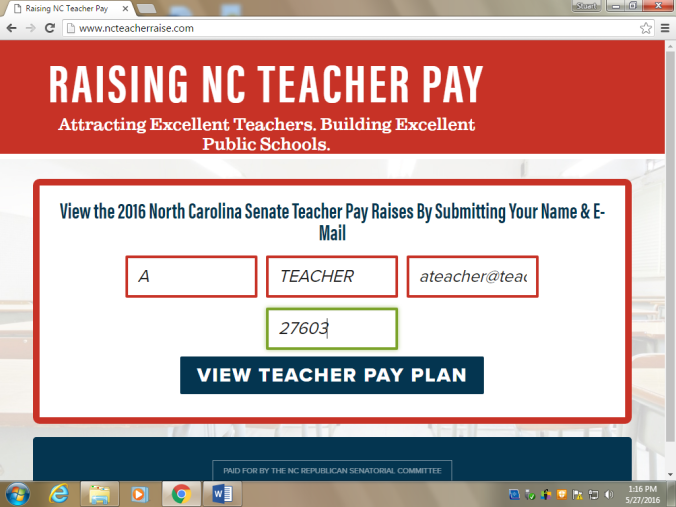 And I got this. 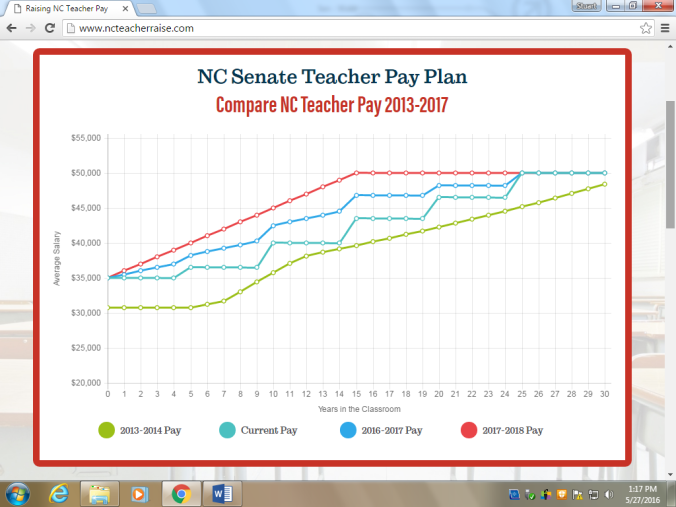 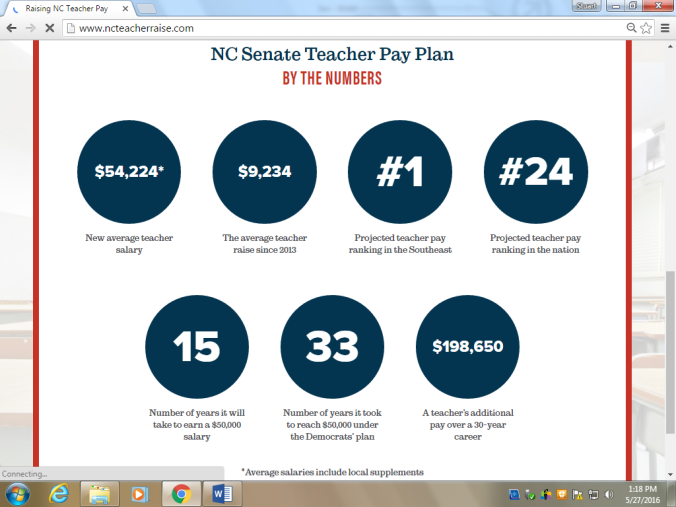 The first chart with the line graph simply says that a teacher in North Carolina will get to the maximum salary within 15 years of experience. But it is interesting to see how the proposed 2017-2018 salary looks inviting.

THAT’S BECAUSE ALL OF THE OTHER ONES ARE THAT BAD. When you have nothing to look at except horrible options and then you present an option that is a little less horrible, that last option will really stick out as amazing to many people. But it isn’t.

It still shows that the highest amount of salary a new teacher will ever make is 50,000. That’s terrible. As one sees his/her children grow and want to go to college, the amount of money being netted still amounts to the same. Not many teachers will appreciate making the same amount of money in year 30 as he/she did in year 15. And it totally negates that there is no longer longevity pay for veteran teachers, and no longer advanced degree pay or due process rights for new teachers.

Furthermore, it’s just a proposal. A fictitious line in the sand.

The second screen shot highlights some spun numbers and explanations of those numbers. Allow me to translate the information.

Maybe the saddest part about all of this is the time wasted in giving the NC Republican Party my name and email address to keep on file to repeatedly send me more spun rhetoric.

Actually, I didn’t give my real name. The one I supplied was fictitious.

2 thoughts on “Sen. Berger’s New Website -BS – I Mean – Propaganda At Its Best”