When you become the parent of a child who happens to have Down Syndrome, your mind can fly to a lot of places, especially the future.

My wife and I had a prenatal diagnosis of Malcolm’s extra genetic material. It’s quite startling to have this preconceived expectation of what your child will be like instantly changed by a medical test. Can’t lie about that.

Sometimes you can get caught in a dream of having a child who goes on to do great things in the eyes of others, and then you are told that there might something “wrong” with the child both physically and developmentally.

But here’s the weird thing. There’s nothing wrong with him. He’s just perfect in his way.

When Malcolm decided to come into the world twenty-something days early with his plume of fire-red hair, an older nurse said something about Malcolm being one of “those” children. It struck both my wife and me fairly hard that he was already being stereotyped, and there are a lot of stereotypes surrounding children with Down Syndrome. But Malcolm seems to have debunked most all of them. In fact if you meet people with Down Syndrome, ten ou might realize that most stereotypes associated with them just do not have much merit.

But here’s the one thing that Malcolm does that I really wish I could do – live in the moment. He is totally committed to the now. Especially when it pertains to outdoor adventures. The boy loves being outside, so much that we had to put a fence in the back yard because he likes to go outside so much, even in the middle of the night.

This adventure involves ducks. They quack. They waddle. Malcolm likes that.

So last weekend we went to the Bull’s Hole Duck Race on the South Yadkin River in Cooleemee. Why? Well…

First, the Yadkin might be the clearest river ever. No. Secondly, it helps out a worthy cause. Third, we had never been to Cooleemee. Even spelling the name Cooleemee is rather cool. So what do you do when you get there?

You “sponsor” some ducks for a price and get a ticket with a number(s) on it. The number corresponds to a rubber duck that will be in the race. When all tickets are sold, all ducks are dropped in the same place in the river to be led through the rapids by the flow of the river and whoever has the ticket for the duck which crosses the finish line first wins the jackpot.

So Malcolm is all into this whole duck race. It is the moment.

Here he is summoning some higher power to make his duck be first. Something Gaelic I believe with a hint of yodeling. 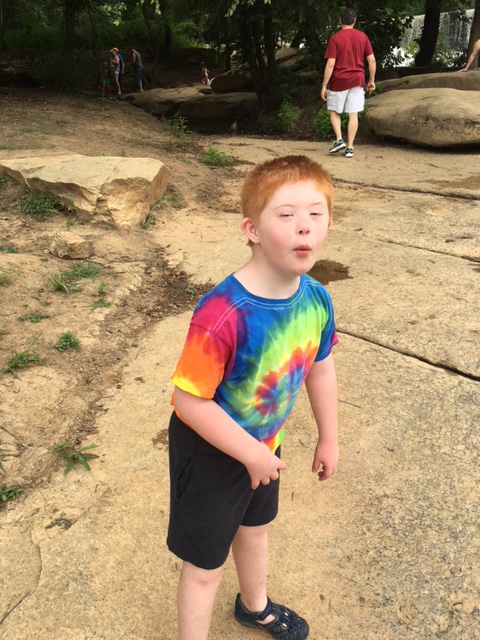 Then they drop the ducks from a front-end loader of a tractor that happens to be in the middle of the river. 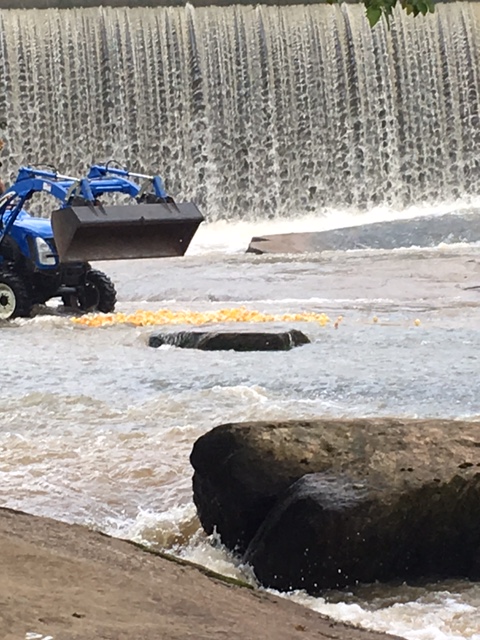 And they are going! Some do go faster than others. “Float! You damn duck!” I think he is taking this way too seriously, but it is a moment. 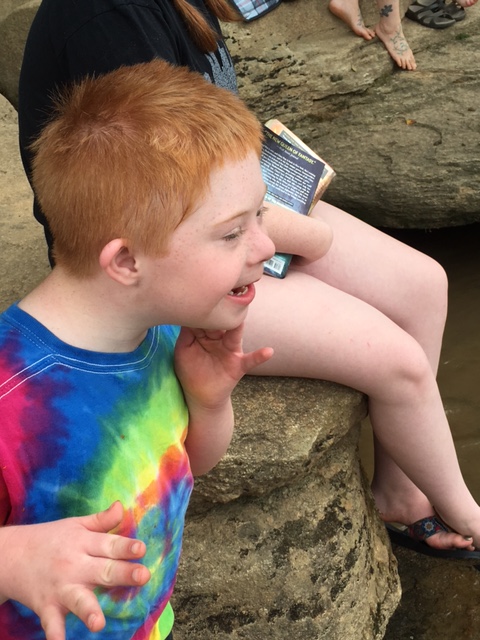 “Dammit! I didn’t get any money that I would never spend because I am not materialistic!” He cusses sometimes. Which is another thing about kids with Trisomy 21. They pick up words more quickly than you think. Especially interjections. 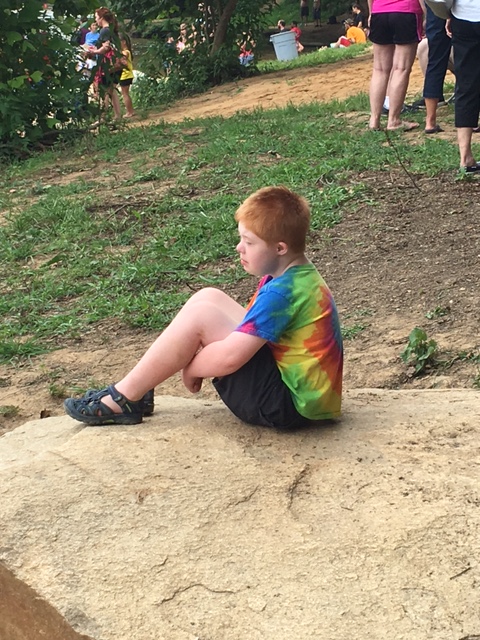 We did not win any money. Not a big deal really. Why? Because we had another moment to be in. There were ladies to talk to, music to dance to, and milk to be drunk. We were outside. That was all that mattered.

And you wonder what you were ever worried about when he was born.