Two and ½ hours in a car on the highway if you are barely breaking the speed limit on an interstate.

160 miles is also the radius for the strongest aftershocks for the GOP earthquake called HB2 whose epicenter lies beneath West Jones Street in Raleigh.

This past Friday the newspaper in Roanoke, VA, The Roanoke Times, wrote on their editorial page under the title “Our view: Ballot selfies and other election thoughts” the following:

“Which candidate would do the most to help our local economy? That’s easy. It’s Pat McCrory, the Republican governor of North Carolina, who’s seeking his second four-year term in the November election. We can point to specific and multiple ways he has helped the economy — our economy. North Carolina panicked and made a spectacle of itself by passing HB2, its so-called “bathroom bill.” In response, various companies and even sports leagues pulled events from the state. Three of those have wound up in Salem — the NCAA Division III men’s and women’s soccer championships, as well as the Division II Central Intercollegiate Athletic Association football championship. That’s money in the bank for us.

McCrory has given Virginia a competitive advantage in economic development, as well. When the University Economic Development Association recently held its national conference in Roanoke, the keynote speaker highlighted a North Carolina program to encourage partnerships between colleges and companies, as a way help recruit technology companies interested in research and development. The speaker hailed it as a model for other states to follow as they try to build a “knowledge economy.” Then the speaker noted that McCrory had cancelled it. The pro-business audience groaned.

On Monday, a data company picked Richmond as the site for a new office, with 730 jobs. Industry officials said it beat out Charlotte specifically because of HB2.

Feel free to argue all you want which presidential candidate would be best, but it’s clear that Virginia would be best served if North Carolina re-elected McCrory” (http://www.roanoke.com/opinion/editorials/our-view-ballot-selfies-and-other-election-thoughts/article_bb97e9ce-ff92-580e-8b8b-6d3390b921b1.html)

It was not really that satirical. It seems very sincere in some ways.

To be endorsed because of how bad your policies are in your home state and that you are driving jobs and economic development into another state might be one of the strongest remarks ever delivered concerning HB2.

Roanoke is about 160 miles from Raleigh.

Then there was that time this past month when Gov. McCrory’s hometown newspaper The Charlotte Observer openly explained why it was not endorsing the governor for the first time in over 25 years (http://www.charlotteobserver.com/opinion/editorials/article108338327.html). It begins,

“The Charlotte Observer’s editorial board has endorsed Republican Pat McCrory in every one of his bids for office since 1991. That includes twice for City Council, seven times for mayor and twice for governor. That streak comes to an end today.

McCrory’s term as North Carolina governor is the ultimate illustration of the Peter Principle: that people are promoted based on their past performance and not the abilities needed for the new role and thus rise to the level of their incompetence. McCrory has certainly done that.”

It is a stinging piece of truth from the town that was first targeted by the “bathroom bill.”

Charlotte is about 160 miles from Raleigh.

Then there was the News & Observer on October 17th which ran full page news ad for a group called the Writers for a Progressive North Carolina who proved the McCrory that on your 60th birthday, you could have your cake and eat it too. 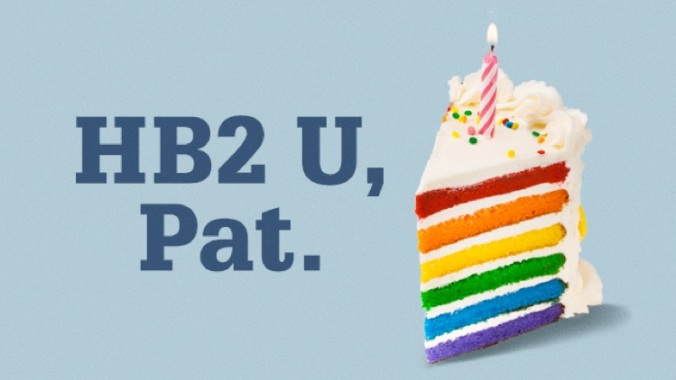 The News & Observer is about a 160 second drive from West Jones Street in Raleigh.

The 160 mile radius that surrounds the governor’s mansion engulfs a wide swath of the state. To feel strong aftershocks in places like Roanoke and Charlotte, there’s no telling what the people within 160 miles of Raleigh are feeling. Places like:

And to think that this area within the 160 mile radius has the largest amount of voters in the state.

Imagine the aftershock on November 8th.