Brenda Berg’s recent perspective posted on EdNC.org’s website this past Friday is another example that appearance and reality are not always the same when it pertains to “reforming” the public education system here in North Carolina.

“(Not) Taking Sides: Civil Discourse with Michelle Rhee and George Parker” appears as an open missive from the CEO of BEST NC that attempts to invite us all as stakeholders in public education into a conversation to build understanding and possible common ground (https://www.ednc.org/2017/02/17/not-taking-sides-civil-discourse-michelle-rhee-george-parker/).

What probably precipitated this op-ed was a very publicized backlash from public school advocates about the invitation to have Michelle Rhee and George Parker speak at a closed-door legislative meeting that did not allow the media or teacher advocate groups to attend. I myself wrote an open letter to Ms. Berg and BEST NC decrying this session with Rhee, whose reputation alone mixed with the ideologies of the supermajority in the NC General Assembly do not sit well with public school educators, especially when teachers were not part of the meeting.

As stated in her perspective,

“And yet, some people told us to shut the door on them. I couldn’t believe it.”

That alone shows the very disconnect that BEST NC has with public education because in this whole conversation the one group that affects the most positive force in public education is not engaged: teachers.

The perspective used a copious amount of collective pronouns as a way of creating some sort of common ground and common purpose. The “we’s” and the “our’s” along with loaded rhetorical questions throughout the op-ed almost feel like a commercial with a slow playing piano. But when considering the history of “reform” here in North Carolina in public schools, there really has been no invitation to teachers and groups that represent teachers from BEST NC except for maybe the Hope Street Group and that is a small number.

Furthermore, Mrs. Berg herself wrote an EdNC op-ed in the summer of 2015 called “The real war on education in North Carolina,” a rebuttal to a piece written by a former teacher and public school advocate (https://www.ednc.org/2015/08/12/the-real-war-on-education-in-north-carolina/). What that article did not do well was realistically portray the state of education. Many of the statistics used were incorrect and the conclusions derived were easily debunked.

But what Berg’s article did do well was to show that there was a “war” and how out of touch many in the reform movement are when examining the classroom. And considering that most, if not all, of the “reforms” instituted within the last four years in NC have come from politicians, it only makes sense that teachers come to the defense of public education.

This recent perspective seemed a light admonishment to all of those who spoke against having Rhee come to talk about her ideas and initiatives. Yet it shows how short-sighted many can be when they claim to take the ethical high road. While BEST NC was telling teachers and educators that it was just an exchange of ideas, the action and timing of such a meeting spoke volumes about possible agendas. 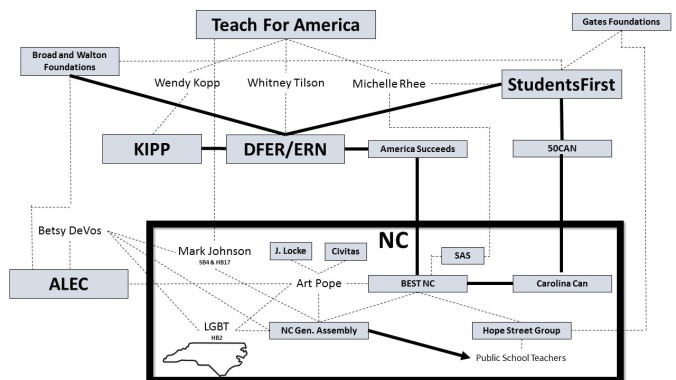 While it may be hard to actualize all of the relationships that are represented here, one can see that in the bottom right-hand side of the chart is the one entity that seems to not have a stake in the current reform movement: public school teachers. (All of the relationships depicted above are explained here: https://caffeinatedrage.com/2017/02/11/the-dramatis-personae-in-the-privatization-of-public-schools-in-north-carolina-or-who-is-trying-to-reform-education-through-deformation/).

When considering all that has occurred and considering all who have joined forces to enact “reform” how am I as a public school teacher supposed to believe that a Teach For America alumna who at one time commanded a speaking fee larger than the average NC teacher’s salary, who has direct connections with both charter school development and voucher use, who left an entire school district in a state of absolute confusion amid a testing scandal, who has been linked to the funneling of money from “unknown” investors into efforts to privatize school systems around the country, and who champions high stakes testing as a means of evaluating teachers while neglecting actual student growth in a country that just confirmed Betsy DeVos as secretary of education is coming to a right-to-work state as the guest of a business coalition whose vice-president actually worked for a group aligned with the guest speaker to talk to a body of lawmakers and decision makers who already have shown a proclivity to spending public money on charters and vouchers and giving unwarranted power to a neophyte TFA alumnus of a state superintendent, who have removed due-process rights, stunted salary schedules, and created ambiguous evaluation systems just to talk about career pathways in a secret meeting when the leader of the hosting group says, “Why should we shut people out?” and  “We love to have a lot of diverse perspectives come to the table” and yet the leader leaves out teachers and other teacher advocacy groups that she claims to “elevate?”

Berg’s perspective did mention that a press conference was held.

“With that in mind, we moved ahead with the event and even offered an opportunity for the media and public to engage in the conversation.”

But it bears repeating that press conferences are controlled conversations and the supposedly frank, direct questions were reserved for the other side of the wall. In fact, this press conference seemed more like a preemptive move to satiate demands for more transparency without sacrificing the main purpose of the meeting itself.

Interestingly enough, what gets mentioned in the perspective about Rhee’s accomplishments in her current endeavor with the Washington D.C. schools is not presented in the full context of what surrounds those accomplishments. Berg states,

“Didn’t they understand that according to NAEP – the nation’s report card – Washington, D.C. is the fastest improving education system in the nation?  Perhaps they didn’t realize that recent policies in support of educators have been widely credited with the continuing successes there. Why would we deprive ourselves of an opportunity to learn from what has happened in Washington, D.C. over the last decade?”

And indeed a lot can be learned from the last ten years in Washington D.C.

Those who praise what Rhee and Parker have done with Project Impact and the D.C. schools may point to a study by Thomas Dee and James Wyckoff from the Stanford Center for Education Policy Analysis entitled “Incentives, Selection, and Teacher Performance: Evidence from IMPACT.” A link to that study can be found here: https://cepa.stanford.edu/sites/default/files/w19529.pdf.

Yes, it does show that the performance of teachers is on the rise. But many have found wrinkles in the study because it focuses solely on certain teachers and does not seem to acknowledge that the demographics of the student population has changed in the past ten years based on socio-economic factors such as income and class. It also did not talk about how student performance improved because of “rising” performance of teachers.

John Merrow, the veteran education reporter for PBS, NPR, and dozens of other national publications, has a blog where he discusses trends in public education called Taking Notes. His posting “A Rash of Studies” explored Rhee’s Project Impact and is worth the read (http://takingnote.learningmatters.tv/?p=6617).

But what Merrow posted before that really puts Rhee’s Project Impact into perspective. In “A Story About Michelle Rhee That No One Will Print,” Merrow provides the content of an unpublished op-ed that looks at the context of what actually happened behind the scenes. The op-ed is entitled “Caveat Emptor: Michelle Rhee’s Education Reform Campaign.” It can be found here: (http://takingnote.learningmatters.tv/?p=6490).

And while the NAEP is given every two years to a small representative segment of the school population, D.C. does have the PARCC tests. Pulitzer prize winning columnist Colbert I. King in the Jan 1, 2016 edition of the Washington Post reported,

“The final page has been turned on D.C. Public Schools’ 2015 calendar. But 2016 begins with the same uncompromising problem: the school system’s huge racial achievement gap.

The tests, known as the Partnership for Assessment of Readiness for College and Careers exams, or PARCC, showed that just 25 percent of D.C. students in the third through eighth grades met or exceeded expectations on new standardized tests in English. Only 24 percent met a new math benchmark” (https://www.washingtonpost.com/opinions/in-dc-schools-the-racial-gap-is-a-chasm-not-a-crack/2016/01/01/7cfc33e6-afe9-11e5-b711-1998289ffcea_story.html?utm_term=.0345c00dd1ab).

What Rhee seems to be praised for is the appearance of success, an end product of a singular statistic. And as Mrs. Berg said in her article, “We cherry-pick the facts that validate our suspicions.”

Apparently that is true for this episode as well. The fact that “Washington, D.C. is the fastest improving education system in the nation” according to NAEP scores does not explain the continuing achievement gap, the disparity between low-income and higher-income students, and the enabling of charter schools at the expense of traditional public schools that still occur in D.C.

What real “civil discourse” would really show is that education reform cannot be instituted from the top down. It must come from the roots, from the people in the trenches like teachers and administrators, and from the empowering of communities. What Rhee’s accomplishments in D.C. and what North Carolina’s use of bottom-line evaluations show is that what really affects student achievement more than anything is poverty and other issues that students face in their lives outside of the classroom.

In a state whose General Assembly brags about budget surpluses while nearly a quarter of our state’s children live in poverty, continues to take away teachers’ freedom to be professionals to make them test facilitators, enables an unregulated charter school industry and siphons vouchers to religious schools while giving enormous tax breaks to the very people and businesses who are involved in the reform movement, it is no wonder that Rhee was invited for “discourse.”

Ironically, the very people involved in that “legislative session” with Michelle Rhee could have a greater impact on overall student achievement and growth if they focused more on their investments in the communities themselves – the communities that look to the public schools as a foundational piece of their cities and towns.

But with all the talk of overhauling the Affordable Care Act which covers many more North Carolinians than people realize, the economic impact of stupid laws like HB2 which hurt our communities, and the current tax structure that puts more burden on those who make less, what North Carolina is doing is actually attacking the public school system from both sides.

One side is trickle-down reform. The other side is stagnating social mobility.

And all of this “civil discourse” amongst reformers is nothing more than talking with people who share their false beliefs about how bad teachers are.