And I say that with all due respect. I grew up a Georgia Bulldog fan. Went to high school in Athens. Got a family of Bulldog alums. Went to every home football game from the time I was five until college.

Then K.J. says he will go to that place off of Exit 19 on I-85 in upstate South Carolina.

And I couldn’t be more proud of K.J. because while he became a Tiger yesterday, he made sure to remind us that “Once a Titan, Always a Titan.”

You may not be a fan of football, but you can’t help but be a fan of K.J.. The way he announced his decision was nothing short of classy and inclusive.

As a highly-ranked prospect (#5 in nation), ESPN came to nationally air his decision. But K.J. did not make it about him. He made it about his family and his home. In fact, it is not uncommon to see K.J. at many different events at school whether it be a sports related, performance related, or service -focused event. He truly celebrates what others are accomplishing. He has a large family because it includes all people he cares about.

When K.J. made his announcement on national television, he brought up Coach Pat Murphy to help him show where he will take his talents as a football player. He spoke about team. He talked about gratitude. He celebrated with others by celebrating others. 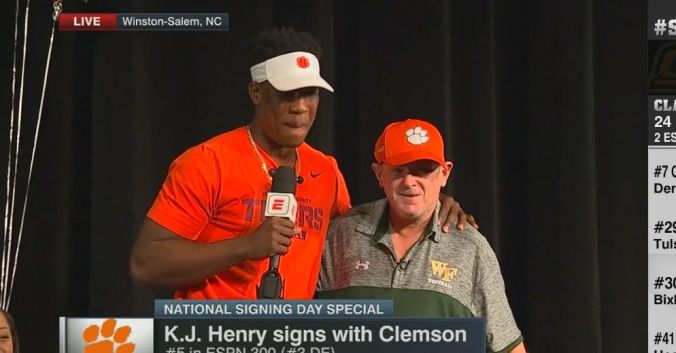 If you are familiar with West Forsyth, then you know Coach Pat Murphy. He is part of the heart and soul of this campus.

If you are familiar with K.J. Henry the football player, then you know he is a special talent. Clemson just became a better team.

But if you know K.J. Henry the young man who made yesterday’s event more about others than himself, then you know he is an even better person. Clemson just became a better place to be.

And I would have no problem with my kid wearing a K.J. Henry jersey.

Even if it is orange.