John Hood of the John Locke Foundation tweeted the following yesterday in response to the NEA’s recent report on teacher pay that had North Carolina still well below the national average.

Interestingly, he tagged it to #nced and referred all readers to a recent post by his colleague Dr. Terry Stoops, the Vice President for Research and Director of Education Studies for the John Locke Foundation. He must have wanted a lot of people to read this.

The John Locke Foundation is a libertarian-leaning think tank whose findings and studies on North Carolina’s public schools is so bent toward a political ideology that celebrates “school choice” and vouchers that it tends to spin data and research so much that it hopes readers will not take the time to actually look into the data themselves.

Earlier today, the National Education Association (NEA) released their annual Rankings and Estimates report.  According to the report, North Carolina’s average teacher salary for 2018 ranked 39th out of the 50 states and Washington, D.C.

Stoops then presents a table that uses the C2ER index for each state. 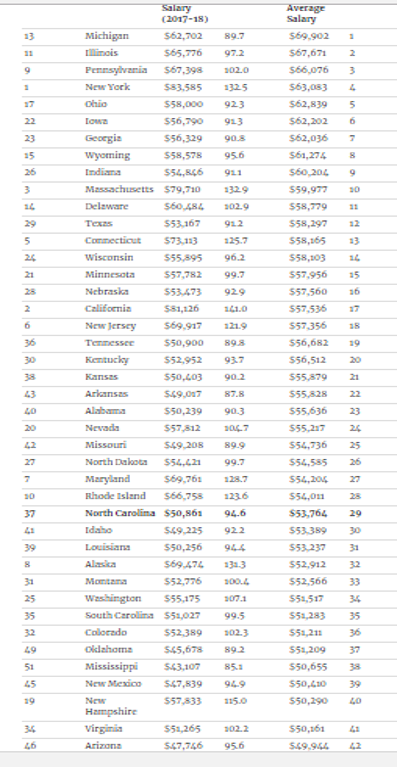 And if one took Stoops’s interpretation at face value, then he is exactly right.

The Cost of Living Index used by Stoops is represented in the map below that the C2ER uses (https://www.missourieconomy.org/indicators/cost_of_living/).

But Stoops simplifies it too much. Even C2ER says so.

C2ER stands for the Council for Community and Economic Research and it even warns against using the cost of living index in such a broad stroke as Stoops has done. Within its 2017 Cost of Living Index, it states,

“For 23 years, participation in the Cost of Living
Index was open to all places, regardless of size.
In the late 1980s, however, several rural places
with very small populations began
participating, and it became apparent that
adherence to the specifications in many such
places wasn’t possible. There’s no doubt that
small rural places offer an alternative to an
urban professional or managerial standard of
living that many people find attractive, but such
places are qualitatively different from urban
areas, and they simply don’t support the kind of
urban lifestyle embodied in the Cost of Living
Index.

The Committee has concluded that
participation in the Index should be restricted to
areas that can reasonably be considered urban
and patterned its restrictions after the federal
government’s distinction between urban and
rural areas.”

You can read that document here: http://coli.org/wp-content/uploads/2016/06/2016-COLI-Manual.pdf. The above is on page 4. In fact, the the C2ER site actually prefers that the index be used when comparing cities to cities – not state to state.

The very warning that C2ER gives in using its COL Index is deliberately ignored by Stoops in order that he keep on his shallow narrative that teacher pay in North Carolina is not all that bad.

Take this a little deeper and one can see that another factor Stoops conveniently ignores is that average teacher pay in North Carolina varies LEA to LEA. Local supplements that are given to teachers in some counties are much better than in other localities because those places can afford to do that. That creates a wider disparity in salaries for teachers within the state.

Metropolitan LEA’s like Wake County can give a bigger salary boost to teachers than many of the rural counties, some of whom cannot give a local supplement at all. And Stoops as well as Hood should know that rural counties suffer more when it comes to staffing schools.

This simplification of the data is not an oversight. It’s part of a plan – a deliberate attempt to sway the narrative to favor those who see simply investing in the public school system at a reasonable rate a burden.

So when Hood says in his tweet, “Even if you disagree, here’s where we really are,” it seems that he doesn’t really know where we are.