It was reported this year that North Carolina finally had an average salary for teachers over $50,000 a year.

“Recently released figures from the state Department of Public Instruction put the average salary for a North Carolina public school teacher at $51,214 this school year. That’s $1,245 more than the previous school year.

The $50,000 benchmark has been a major symbolic milestone, with Republican candidates having campaigned in 2016 about how that figure had already been reached” (http://www.journalnow.com/news/state_region/n-c-teachers-are-now-averaging-more-than-a-year/article_e3fe232c-1332-5f6e-89e5-de7c428436fb.html ).

But that is incredibly misleading. So is the claim that NC has given some of the highest “average” raises in the country because NC is still very far behind the national average for teacher pay.

The operative word here is “average”. What GOP stalwarts purposefully fail to tell you is that most of the raises have occurred at the very low rungs of the salary schedule. Of course, you can raise the salary of first year teachers by a few thousand dollars and it would give them an average raise of maybe 10-15%. You would only have to give veteran teachers a very small raise funded by longevity pay (which we no longer get) and the OVERALL average raise still looks good, and not much money has to be invested.

“Average” does not mean “actual”.  But it sounds great to those who don’t understand the math.

This reflects a whopping double standard of the NC General Assembly and a total contradiction to what is really happening to average teacher pay. Just follow my logic and see if it makes sense.

The last six years have seen tremendous changes to teacher pay. For new teachers entering in the profession here in NC there is no longer any graduate degree pay bump, no more longevity pay (for anyone), and a changed salary schedule that only makes it possible for a teacher to top out on the salary schedule with a little over 51K per year. 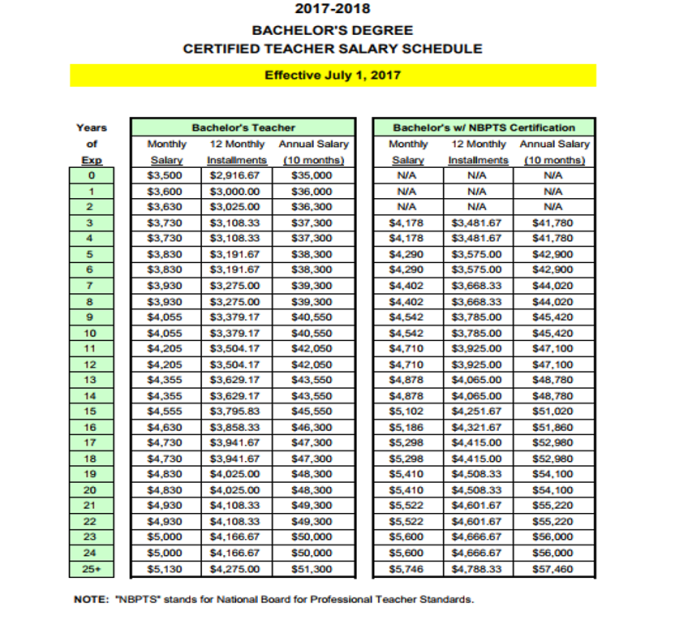 So how can that be the average pay in NC be over 50K when no one can really make much over 50K as a new teacher in his/her entire career unless they all become nationally certified (which takes a monetary investment by the teacher to start)?

Plus, those LEA’s will have to do something in the next few years to raise even more money to meet the requirements fo the delayed class size mandate.

Any veteran teacher who is making above 50K based on seniority, graduate pay, and national boards are gladly counted in this figure. It simply drives up the CURRENT average pay. But when these veteran teachers who have seniority, graduate pay, and possibly national certification retire (and many are doing that early at 25 years), then the very people who seem to be a “burden” on the educational budget leave the system.

In actuality, that would drive the average salary down as time goes on. If the top salary that any teacher could make is barely over 50K (some will have higher as National Board Certified Teachers, but not a high percentage), then how can you really tout that average salaries will be higher?

You can if you are only talking about the right here and right now.

The “average bear” can turn into a bigger creature if allowed to be mutated by election year propaganda.

Remember the word “average” is a very easy word to manipulate. Politicians use it well. In this case, the very teachers who are driving the “average” salary up are the very people that the state wants to not have in a few years. There will then be a new average. It can’t possibly be over 50K then if current trends keep going.