Does it not make sense that if Mark Johnson and his cronies were listening to teachers closely and acting upon what those teachers were concerned about in these last few years, that we as public education advocates would not even have to entertain the thought of another protest on May 1st?

Below is Johnson’s reply to last year’s May 16th protest.

That whole idea of not rallying for public schools on a school day? Seems rather hypocritical coming from someone who headlined a school choice rally on a school day in January of 2018.

Johnson was the keynote speaker. He rallied for charter schools in a state that has gone out of its way to deregulate charter schools, ramp up vouchers, and use taxpayer money to fund those endeavors when no empirical data shows an overall increase in student achievement.

There were students, parents, and charter school officials at that rally. Makes you wonder of they missed school that day.

Yet on May 16th, 2018, when nearly a fifth of the state’s teaching force showed up in Raleigh where was Mark Johnson?

Not there in Raleigh. He didn’t even tweet about it. What a great opportunity it was for him to “support” educators and public school advocates.

And with the coming rally for May 1st, 2019, Johnson has already issued a statement concerning his “support” for teachers, but his “nonsupport” for their protesting actual issues that affect schools. 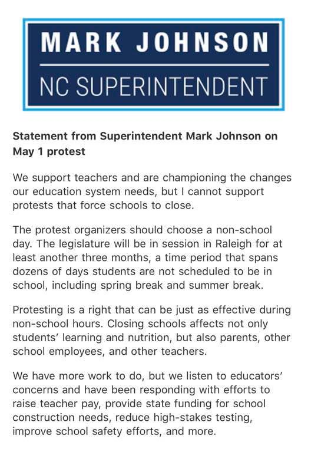 The statements from Johnson about the rallies of 2018 and 2019 are actually somewhat similar. Both talk about teacher pay. Both talk about his cursory support for teachers. But the 2019 statement talks about construction needs, over-testing, and school safety. If Johnson is identifying even more issues that need attention in 2019 than he did in 2018, then he is literally telling us that the only way he may try and affect change is having a protest come to him.

It’s hard to believe that a puppet of a state superintendent is willing to listen to “educators’ concerns” when he never has rallied with teachers or for public schools, but rather seems more interested in being friendly with those who seek to privatize public schools like in the following instance:

That was on June 26th, 2018, a little over two months after the big rally for public education. By the end of the week, Johnson laid off over 40 DPI veterans. Actually, the Human Resources Dept. did the laying-off. Johnson wasn’t there like he wasn’t in May of 2018.

Today’s statement also did not show his understanding of what specific issues are being addressed by the May 1st protest. There is no mention of Medicaid expansion, raises for classified employees, funding for student services, restoration of graduate degree pay, and restoration of retiree benefits for new hires.

Not one mention. And he claims to be listening to educators’ concerns?