As of this moment, there are 30 school districts that have closed for May 1st in response to teachers asking for personal leave to attend a rally in Raleigh. 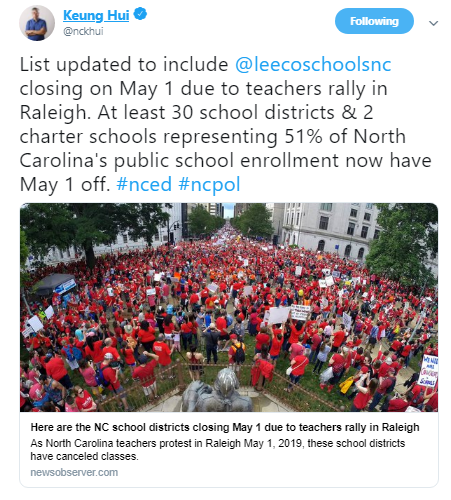 And since the above tweet from the N&O’s education reporter, two more charter schools have announced they will be closing that day as well. That’s a total of 30 school districts and four charter schools representing a little over half of the public school students in the entire state of North Carolina.

The latest map from Red4EdNC.com shows those districts (remember some of those LEA’s are city systems) that are closing in red.

The pink shows counties that have teachers who are planning to come to Raleigh but whose systems are not closing.

In comparing the timing and the number of systems that have closed so far this year for the May rally to the same number of school systems for last year’s rally, there are some differences. The following data table is compliments of Lisa Gerardi of the Durham Association of Educators.

If you notice that in 2018, the numbers were slow to grow then there seemed to be a domino effect and a large spike in system closures in the days before the rally.

This year the number of systems to close seems to have been a steady increase, but the overall number of system closures now trails what happened last year at the same time before the actual rally. In fact, in the six days prior to the May 16th rally, 16 more districts closed. What additional systems might close this year is yet to be seen.

Also interesting (as Gerardi explains) is the number of systems who closed last year but are not closing this year.

Two systems that have announced they will close this year did not last year: Weldon City and Bertie County.

Back to those 15 county/city systems that closed last year but did not close this year – 14 of them are solidly red according to the 2018 presidential elections (Buncombe County does not include Asheville City Schools, which is heavily blue in that category).

It is interesting to note that through social media and direct contacts some districts have been actively trying to keep teachers from leaving in high numbers to demonstrate in Raleigh by allowing maybe two teachers from each school to possibly attend (at most). Some teachers have even reported that they have had personal leave requests denied in the weeks before the rally by principals at schools in the very systems that closed last year for the rally.

Seems more than coincidental. Justin Parmenter wrote about this very subject in one of the posts on his blog Notes From the Chalkboard.

“In numerous counties, superintendents and school boards are offering to ‘facilitate’ delegations of teachers going to Raleigh to advocate.  Union County Public Schools, for example, is congratulating itself as a ‘forward thinking’ school district for being on the front lines of fighting for good education policy and encouraging teacher leadership by allowing teachers from each school to be in Raleigh on May 1 (while ensuring schools stay open that day).

Don’t get it twisted.

These districts are doing everything they can to keep teachers from leading. What they’re after in this case is the appearance of supporting teachers, but their premise is that the terms must always be dictated from the top down rather than through a powerful movement created by everyday teachers like you and me.  Their goal from the very beginning this year has been to do whatever it takes to keep schools open on May 1. Their goal has been to make sure that teachers do not have the power.”

It would be very interesting to see the party affiliation of the NCGA representatives that serve those counties and have a crystal ball into their possible roles in the recent budget lines items concerning personal leave released on April 26 to curb another rally from taking place by teachers.

Parmenter specifically mentions Union County, whose representative in the House chamber is Craig Horn. He has been very vocal about not wanting teachers to rally. He was recently called upon to offer a quote in a News & Observer report from April 11,

But Rep. Craig Horn, a Union County Republican and co-chairman of the House Education Committee, said NCAE is running the risk of wearing people out with yet another mass protest.

Makes one wonder if there has been a plan to keep teachers from being able to come together to demonstrate.

Actually, it seems more than likely.