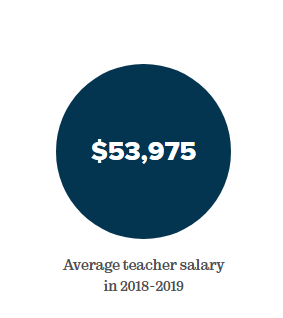 The above is a graphic proudly shown on the Sen. Phil Berger-enabled propaganda website www.ncteacherraise.com.

There are a lot of “spun” numbers and claims on this website that are easily debunked with more context and clarity.

That figure as it stands actually is correct, but it includes all of the advanced degree pay still given to veteran teachers that has been taken away from newer teachers. And do not forget that the average pay will decrease over time as the highest salary a new teacher could make in the newest budget is a little over 50k.

That average salary also is counting another another financial factor that people like Berger want to get credit for but do not deserve known as the “local supplement.”

Some may be wondering, “What the hell is that?” Well, a local supplement is an additional amount of money that a local district may apply on top the state’s salary to help attract teachers to come and stay in a particular district. While people may be fixated on actual state salary schedule, a local supplement has more of a direct effect on the way a district can attract and retain teachers, especially in this legislative climate.

My own district, the Winston-Salem /Forsyth County Schools, currently ranks in the 20’s within the state with local supplements. Our neighbor, Guilford County, ranks much higher.

What gets twisted here is that in creating local supplements for teachers many mitigating factors come into light and when North Carolina began bragging about the new average salary it was telling you that Raleigh was placing more of a burden on local districts to create a positive spin on GOP policies in an election year.

It also gives you a little more insight into the provision passed by the NCGA to allow property taxes in localities to be used to finance local schools more (last year’s HB514, known as the Municipal Charter School Bill).

The past few budgets that were passed cut monies to the Department of Public Instruction, therefore limiting DPI’s abilities to disperse ample amounts of money to local county and city districts for various initiatives like professional development and support. When local central offices have less money to work with, they then have to prioritize their needs to match their financial resources. That means some school systems cannot offer a local supplement to teachers because they are scrambling to fulfill other needs that a fully funded state public school system would already offer.

And it is not just about whether to have a couple of program managers for the district. It’s about whether to allow class sizes to be bigger so that more reading specialists can be put into third grade classes, or more teacher assistants to help special needs kids like mine succeed in lower grades. Or even physical resources like software and desks.

What the current GOP-led NCGA did was to create a situation where local districts had to pick up more of the tab to fund everyday public school functions.

What adds to this is that this governing body is siphoning more and more tax money to entities like charter schools, Opportunity Grants, an ISD district, and other privatizing efforts. Just look at the amount of money the state has spent on private lawyer fees to defend indefensible measures like HB2, the Voter ID law, and redistricting maps?

These differences can add up. (And there are a handful that do not give any supplement).

For a younger teacher, that can swing a decision. And we in WSFCS get a lot of teacher candidates. Look at the teacher preparation programs that surround us – Wake Forest, Winston-Salem State, Salem College, App State, and UNCG just to name a few that actually place student teachers in my school.

This past summer, the Winston-Salem Journal published a piece on the current state of teacher supplements in the WSFCS system. Dr. Don Martin, a current county commissioner and former superintendent of WSFCS, featured heavily in the latter part of the article.

He said that once the school district determines the amount it wants to spend on supplements it needs to figure out if it wants to restructure its steps, which is the equivalent of the various years of experience, so that it rewards experience or inexperience.

He said the starkest difference in terms of school districts he is aware of is between Guilford County Schools and WS/FCS.

“So if you’re a teacher who wants to make your most money, you go work 15 years in Guilford then come over to Forsyth and work 15 years,” Martin said.

Simply put, local supplements are a big deal and complicated. It gets more complicated when the state starts placing more financial burdens on LEA’s to fulfill state mandates.

For a veteran teacher like myself, a competitive local supplement could mean that I feel valued by the very system that still lacks enough teachers to start the school year fully staffed. For a new teacher, it could be the difference to taking my talents, energy, and drive to a particular school system and becoming a part of the community.

So, what can a district’s community do to help teachers come and stay in a particular district?

The current culture in our state has not been very kind to public school teachers. Competitive local supplements could go a long way in showing value in public schools.

Because the state will certainly use them to pad their numbers on how well teachers are being paid.