Another disingenuous “explanation” of the overall success of charter schools here in North Carolina appeared on EdNC.org this week.

And it invoked Mark Twain.

This one was penned by Lindalyn Kakadelis, the Executive Director of the North Carolina Coalition for Charter Schools. In an effort to “rebut” the criticism of the latest Charter School Advisory Board’s decision to not include demographic data on charter school student bodies, Kakadelis rehashed a few of the same debunked talking points that have appeared of late by Rhonda Dillingham and Sen. Deanna Ballard.

Dillingham, the Executive Director of the North Carolina Association for Public Charter Schools, defended North Carolina’s charter schools from criticism concerning perpetuating segregation back in September of 2019 on EdNC.org. In it she claimed,

The Excel spreadsheet linked here (Charters With Race Makeup From 2018 SRC)  is a list of every charter school that exists now in this state that had a school performance grade attached to it for the 2018-2019 school year. It is cross-referenced to the last full school report card it has on record from the 2017-2018 school year.

Those school report cards have the breakdown of each charter school’s student body by race and economic disadvantage.

According to the Excel spreadsheet’s data which includes 173 charter schools,

That doesn’t really back up Dillingham’s claims.

The next month, Sen. Deanna Ballard stated in a Center Point article  many of the same claims that Dillingham did.

Ballard said the racism claims are the critics “last hope for killing school choice,” but she thinks it is a shot in the dark.

Enrollment numbers in North Carolina paint a different picture from the “white flight” that Mangrum described, according to Ballard.

About 20 percent of school-aged children do not attend traditional public schools, according to state numbers. The charter schools have a higher percentage of African-American students than public schools do.

Maybe it would be a good idea to see how the student makeup of each of these charter schools compares to nearby public schools. In this post, the site SchoolDigger.com was used. Each charter school in Ballard’s district was entered into the same search fields.

Here is what was found. 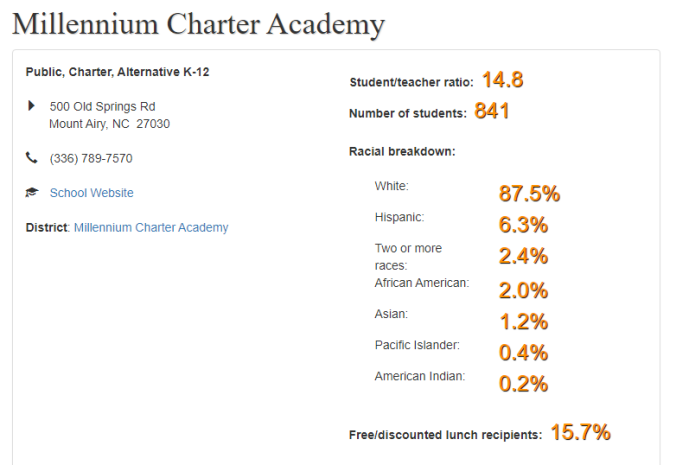 Millenium Charter: 15.7 free and reduced lunch. Take a look at the table above of the nearest high schools – particularly Mount Airy High School which is the closest one.

Compare the percentages of student makeup.

Here’s Two Bridges compared to other close elementary schools. Again, take a look at the percentages of Free/Discounted Lunch Recipients and race makeups.

But two of three school in her district portray a vastly different image than the one she proffers in her words within the Center Point article.

Kakadelis went one step further. Not only did she make the same claims about the demographics of North Carolina’s charter schools – she said they performed better. But she does not show a real investigation of the data.

In her op-ed Kakadelis states,

This leads to another factor of reporting complexity when comparing charters to a specific county school system: Charter schools may draw students from multiple counties and thus may not have student enrollments that are reflective, exclusively, of the county system in which these schools are located.

And our school performance grades have already shown that schools with higher levels of poverty have lower SPGs.

She seems to equate achievement with growth, when growth is a better indicator of how well schools do with the students they teach. From Kris Nordstrom:

In fact, here is a better indication of charters versus traditional schools when looking at growth (also from Nordstrom).

So Mark Twain is rather applicable here.

The problem is that Kakadelis chooses not to look at all of the facts.

3 thoughts on “Yes. Facts Do Matter When Talking About North Carolina’s Charter Schools.”