The confirmation hearing for Betsy DeVos for Secretary of Education was a disaster. For public school advocates it might foreshadow a growing storm for many reasons.

Betsy DeVos is a divisive figure who showed that she not only has no background in education, she seems oblivious to the idea that there are federal statutes that are involved in education. 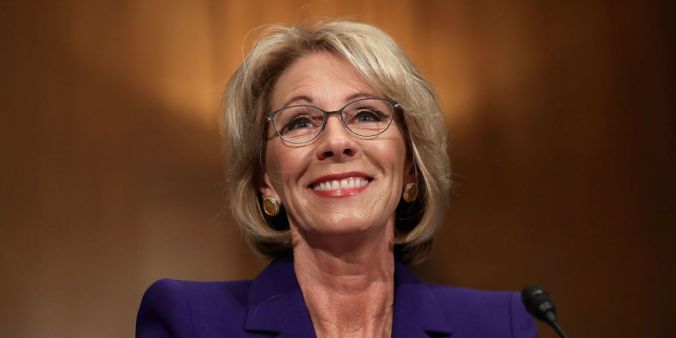 Below is a link to a Washington Post video entitled “6 head-scratching moments from Betsy DeVos’s confirmation hearing” which summarizes some of the more poignant moments of the hearing.

Take a look. And before you say that things were taken out of context and that they were all spurred by Democrats, remember that Sen. Lamar Alexander limited the time that questions could be asked. Sen. Lamar Alexander also gets contributions from DeVos. He as well as Sen. Lieberman couldn’t blow more manufactured sunshine or pile anymore manure on their words in praising DeVos.

I regularly go to this blog. It is worth the read, and I admire the job Valerie Strauss does with it.

Strauss summarized with the following:

Those who may play devil’s advocate here may say that even presidents like Obama appointed people to posts who were cronies and or donors. And that is true. And Obama really didn’t help public education with Race To The Top or the selection of Duncan or King for the post; however, those people shine in comparison to DeVos.

DeVos doesn’t even speak the language of public schools. Arne Duncan and John King at least knew about public education.

DeVos seems to be completely removed from public education and she is to lead our public school system?

The irony here is too thick to even digest in a 180 day school year, but there is no doubt that DeVos simply got schooled yesterday at the hearing.

And learned absolutely nothing because you can lead a horse to water, but you can’t make the horse drink it.

Even if it is smiling the whole time.