“And I have to tell you that I can’t stop thinking about this. It has shaken me to my core in a way that I couldn’t have predicted. So while I’d love nothing more than to pretend like this isn’t happening, and to come out here and do my normal campaign speech, it would be dishonest and disingenuous to me to just move on to the next thing like this was all just a bad dream”

Michelle Obama might be the most quoted person on the campaign trail for this presidential election.

The first time she was quoted was actually by Melania Trump during her speech at the Republican National Convention. You can read about that here – “What Jay Z Could Teach Melania Trump.”

The second time she was quoted was by Hillary Clinton during the October 9th town hall debate.

However, only one of the two ladies (Hillary Clinton) gave Mrs. Obama the credit for her own words. The other (Melania Trump) simply plagiarized them. Oddly enough, Mrs. Trump has not really been heard from since, and considering the amount of vitriol that her husband is spewing out and appropriately receiving about how men and women conduct themselves around each other, it would seem logical that she would come to the defense of her husband.

I have the greatest respect for Michelle Obama. She is bright, personable, accessible, gracious, and above all, classy. She conducts herself with an unassuming elegance. She exudes confidence that is contagious.

She’s smart. Wicked smart. Simply put, Obama “married up” and “outkicked his coverage” when he married her. 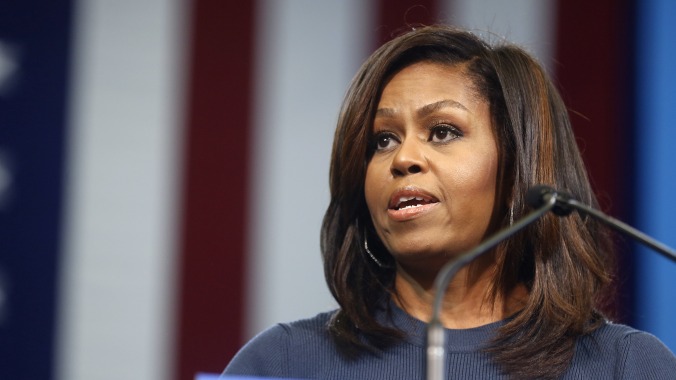 And she’s her own person defined by her own actions and words. I liked her when she was helping her husband run against a man I respect in John McCain (before he was forced to choose Sarah Palin as a running mate).

But I love her when she became the first lady and showed that being a devoted wife and mother did not mean sacrificing what personally drives her to be her own individual.

The night she came out and danced with Jimmy Fallon on The Late Show for a skit on how “moms” dance (“The Evolution of Mom Dancing”) is a classic. Enjoy if you have not seen.

Michelle Obama has actually become the most powerful weapon that Clinton could have on the campaign trail. And today she delivered a speech that might be the most pivotal speech for any candidate this election cycle.

Here is a link.

Walking in to the music of Stevie Wonder’s “Signed, Sealed, Delivered”, she took the stage an then commanded attention.

When someone who does not know what he or she is talking about, that person fumbles over words and sounds stunted. But when someone speaks about something that is part of his/her fiber, then the words come naturally.

Obama is enjoying his highest approval ratings in the last four years right now. But Mrs. Obama’s approval rating was always high. And it got higher today when she elegantly handed Trump’s ass to him without his even knowing.

And it will be quoted for a while.