“But above the gray land and the spasms of bleak dust which drift endlessly over it, you perceive, after a moment, the eyes of Doctor T. J. Eckleburg. The eyes of Doctor T. J. Eckleburg are blue and gigantic — their irises are one-yard high. They look out of no face, but, instead, from a pair of enormous yellow spectacles which pass over a nonexistent nose. Evidently some wild wag of an oculist set them there to fatten his practice in the borough of Queens, and then sank down himself into eternal blindness, or forgot them and moved away. But his eyes, dimmed a little by many paintless days, under sun and rain, brood on over the solemn dumping ground” (The Great Gatsby, Chapter 2).

Almost every student who passes through an American literature class has the opportunity to at least glimpse into the classic text of The Great Gatsby by F. Scott Fitzgerald.

In a day and age of instant gratification and movie adaptations, plot lines and lists of symbols are easily accessed, the patience needed to be pleasantly haunted by a work of true literature sometimes escapes even the best of intentions.

But Gatsby is a book that is rather quick to read, easy to absorb, and forever reflected upon. Among my junior English classes, whether AP level or not, Gatsby tends to be the favorite. Students feel smarter for having read it. They despise the right people. They wrestle with the shallowness of the characters. They seem to like the character who spent so much time becoming the person he was not. They come to look at a narrator as unreliable.

And they pick up on the symbols like the eyes of Doctor T. J. Eckleburg.

When someone sits for a picture or portrait and stares straight into the lens the result is the appearance of constant eye contact. The poster of James Baldwin in my classroom as he looks into the camera allows his eyes to always make contact with mine no matter where I am in the classroom. His smile, however, takes away any preclusion of judgement.

But the eyes of Doctor T. J. Eckleburg simply stare without any other expression. They are there to judge. They are the “eyes of God” in a society where many in power lack a moral compass, show spiritual depravity, and worship profit more than the welfare of others.

They seem to see all.

I followed him over a low whitewashed railroad fence, and we walked back a hundred yards along the road under Doctor Eckleburg’s persistent stare (Chapter 2).

I am thinking of starting a GoFundMe Page to raise money to construct another billboard for the obviously deceased and still fictional Doctor T. J. Eckleburg complete with the same “blue and gigantic” eyes with “irises one-yard high” on “no face” complete with “a pair of enormous yellow spectacles which pass over a nonexistent nose.”

And this billboard would be placed right outside of the North Carolina General Assembly building on West Jones Street, possibly near the parking area where each lawmaker who leaves the building would have to lock eyes with the celestial oculist after a day of wielding power that affects so many people.

“I spoke to her,” he muttered, after a long silence. “I told her she might fool me but she couldn’t fool God. I took her to the window.”— with an effort he got up and walked to the rear window and leaned with his face pressed against it ——” and I said ‘God knows what you’ve been doing, everything you’ve been doing. You may fool me, but you can’t fool God!’”

Standing behind him, Michaelis saw with a shock that he was looking at the eyes of Doctor T. J. Eckleburg, which had just emerged, pale and enormous, from the dissolving night (Chapter 8).

Amazingly enough, if you were to visit the webpages of most of these lawmakers during election periods you might find some sort of piety meter that reflects their allegiance to a faith in God and Christian tenets.

We are in the Bible Belt. We are in a nation that calls itself Christian. We are by far the most evangelical country in the world. We are used to hearing people talk about how they bare their souls to God and look to God for guidance.

I understand. It may be a tad bit hyperbolic to equate a book that talks of a man who uses organized crime to build a life of opulence during the “Jazz Age” / “Age of Prohibition” in an attempt to control destiny who ends up crossing paths with a man of immense wealth who steamrolls over people because he can and looks at women and minorities as inferior then eventually gets killed by a mentally, spiritually, and financially crushed man to a modern setting.

By the way, the original billboard for Dr. Eckleburg is in the “Valley of Ashes.” Imagine if those ashes got into the water. 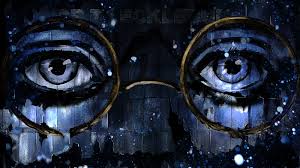 2 thoughts on “West Jones Street and The Eyes of Doctor T.J. Eckleburg”