There are many reasons why Malcolm loves going to West Forsyth Girls Basketball games.

He loves being close to the action.

He loves that the players know him.

And the young ladies on that team interact with him and make him a part of their “family.” Before games some of them come over and fist bump Malcolm as a pre-game ritual. The team even wrote Malcolm a note last year thanking him for his support. It’s in his room.

Something like that makes this father and teacher especially proud to be a part of West Forsyth. And then you see this in the local paper.

It’s a story about one of the players and her father who because of his job cannot make it to her games, but it does not stop him from being close to his family.

A house is where you might keep your possessions, but a home is where the people you love are both literally and figuratively.

A house is usually defined with walls and boundaries. A home is not confined in that way like the distance of three states.

And a person who believes in family knows that the power of the family as a whole is greater than the sum of the individuals.

If you want a great story about family, then take a look at this in the Winston-Salem Journal.

If you want to see a great “family” play some basketball, then come out and see this Titan Girls Varsity basketball team.

Malcolm goes as often as he can. 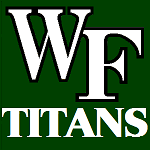