After almost one full year in office, Mark Johnson has shown that he is not ready to be a leader.

In fact, he seems rather satisfied with going around in circles.

The State Superintendent’s most recent op-ed on EdNC.org entitled “North Carolina Public Schools: Accelerating into 2018” is simply a long extended comparison between the state’s school system and a fine-tuned race car that should leave all public school advocates suffocating from the exhaust. (https://www.ednc.org/2017/12/20/north-carolina-public-schools-accelerating-2018/).

It is indicative of someone more concerned with the appearance of matters rather than tackling the very obstacles that stand in the way of public schools succeeding.

It is symptomatic of someone who wants to appear that he is leading, but really is most reliant on certain people on West Jones Street to keep him propped up in office.

It is an avenue that someone with his lack of leadership would use when he has been asked multiple times by the state board of education what his actual plan for the state’s public school system is yet he stares ahead and balks at the opportunity.

In the first paragraph Johnson states,

“Before race drivers start a race, teams fine-tune cars to ensure ultimate performance. At your N.C. Department of Public Instruction, my team and I have been inspecting and calibrating while simultaneously moving forward at a hundred miles per hour. We cannot waste another moment in making our education system better equipped to support educators, parents and students in your communities.”

That sense of urgency with which he defined his brief tenure may translate well inside a small circular course like a NASCAR track, but North Carolina is more vast with differing terrains and different roads.

It has been over a year since Johnson was elected as the state superintendent, and if someone were to try and create a list of his accomplishments as the leader of the state’s public school system, it would be hard not to see that the actions has taken taken are in direct contrast to his campaign “promises.”

But North Carolians have not really heard anything except some glittering generalities.

But did he address the fact that the way the school performance grades will be calculated in the near future with a smaller grading scale and the removal of some indicators like Biology I scores will actually assure that more schools will receive failing grades? And did he acknowledge the fact that those new report cards actually show how much our state depends on SAS’s hidden algorithms to measure school success?

Yet his lack of planning and foresight will make it an intentionally rushed process that will not yield positive results. And if he is calling for an audit, will he allow it to highlight the fact that he is using taxpayer money to hire people to do tasks that are already being fulfilled within DPI? Will that audit state how much money he was given to hire people only loyal to him and to cover the legal bills of the current lawsuit when the state board has to use its own budget to defend its constitutional right?

Yet he never investigated how that money was earmarked and who was responsible for that. Johnson even hired as his Chief Budget Advisor someone who is tied to that debacle (http://www.ncpolicywatch.com/2017/12/06/mark-johnson-accused-misleading-public-regarding-literacy-program-spending/). 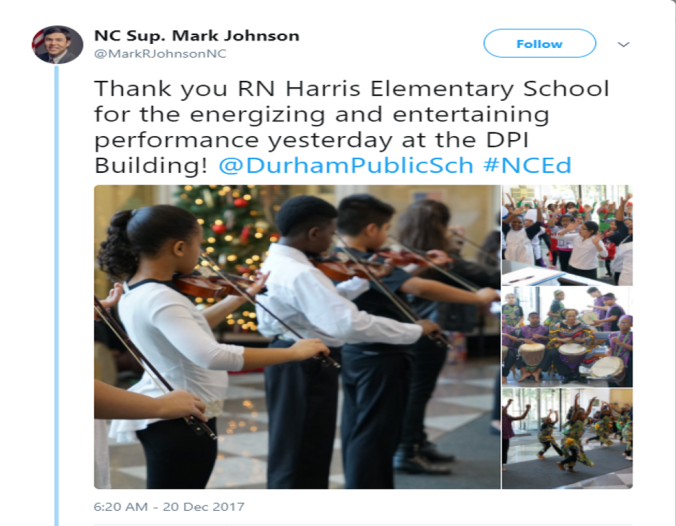 What has he done to help insure that the “specials” stay in our schools with a General Assembly ramming an unfunded class size mandate that threatens almost every local budget.

In fact, when Johnson mentioned “hyper-partisan era of disagreement,” it metaphorically made that race car in the analogy backfire because he himself and the state board of education are stuck in a lawsuit that is about to be judged AND ALL OF THEM ARE OF THE SAME POLITICAL PARTY!

This is not accelerating into the new year. In fact, it is rather confining public school students within a small venue forcing them to always turn in the same direction.

And this post has not even begun to talk about the use of vouchers, the deregulation of charter schools, and the absolute mess that the Innovative School District has become – all of which Johnson supports.

But here is the biggest disconnect with Johnson’s analogy and perhaps the most telling feature of his op-ed. He states,

“While we conduct this important fine-tuning, we know that the best-running car won’t win a race if you drive the wrong way. Education efforts with outdated priorities will take us the wrong direction, so we are moving North Carolina public schools away from a one-size-fits-all approach. That outdated strategy does not work, and with technological advances, we no longer have to pretend it does. At DPI, we want to transform our education system to one that uses 21st century best practices so students and educators have access to unique learning experiences personalized for their individual needs and aspirations.”

While Johnson talks about the “fine-tuning” of a car and the need for different tracks for different people it is tellingly ironic that he uses an analogy that shows people “driving” on the same track in competition with each other. And his narrow-minded comparison seems only to focus on the car itself when the very people he seems to only answer to in the NC General Assembly should be helping more to provide fuel and make sure the track is safe to travel upon. That means addressing economic gaps, poverty, hunger, and investment in public education.

They also need to make sure that a pit crew is there to help.

Besides with everything that is taking place, it seems that we need more all-terrain vehicles that can go anywhere.