You can be either “at” the table or “on” the table.

For teachers in North Carolina, there are many other prepositions that could identify the relationship between the legislation process and teacher input such as “under” the table, “without” a place at the table, or “behind” the table.

As a veteran public school teacher, when I see entities like BEST NC or other “business-minded” reformers defending or lauding a piece of legislation, I take it with a grain of salt.

Or an entire salt block.

Aside from the glowing generalities that sprinkle the rhetoric of many a reformer, I could not help but think that so many other “innovations” that have been created and enacted in North Carolina, they lack a crucial and vital component: teacher input.

Think of  those “new and pioneering solutions” that include the new principal pay plan, the rise of charter schools, the expansion of vouchers, the gutting and rebirth of a distant relative in the Teaching Fellows Program, and much more.

They all have one thing in common: no teacher input.

Were there any teachers involved in these reforms? Any teacher advocacy groups consulted? Any way a teacher could chime in?

Those are not rhetorical questions. And considering that the current General Assembly seems bent upon diluting the voice of groups like NCAE, it should not be a stretch to realize that teachers are not consulted when it comes to schools.

The Report on Education Legislation from the 2017 Session of the General Assembly released by DPI and the State Board has a list of all of the bills that were passed that in one way or another affect public education. 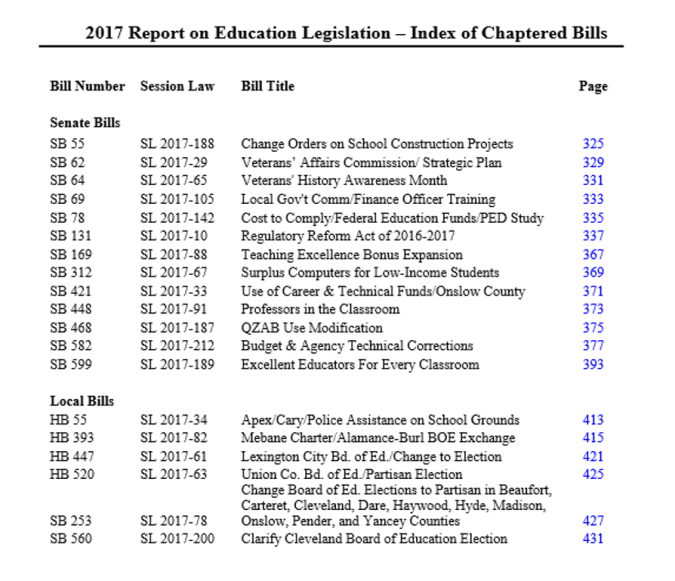 Excluding the “local bills,” how many of those bills and “reforms” had teacher input? How many of those initiatives had any consideration from teachers and asked for contributions from public school educators?

Look at SB599. Sen. Chad Barefoot’s idea of streamlining the teacher recruitment process literally allows for teachers to enter the profession with very little preparation. Was there teacher input?

Again, not a rhetorical question. And do not let it be lost in the world of sadistic irony that Barefoot was the chief champion of the newest version of the Teacher Fellows Program.

When education reformers try and push their agendas can they actually really claim that they have extended relationships with actual teachers and teacher groups?

I do not think so. And that resembles the modus operandi of the NC General Assembly who in 2016 crafted in a special session the very “laws” (like HB17) that were battled over in courts that enabled a man with hardly any educational experience to run without checks and balances the entire public school system.

And the very criteria that measure teacher effectiveness and school performance are established and constantly changed by that same body of lawmakers without teacher input will always translate into a narrative that reform is always needed.

At one time we as a state led the nation in educational innovation.

We sure did. We were considered one of the most progressive public education state systems in the country.

But that was before teachers were not allowed to be “at” the table any longer.

However, there is one way that the table ( and the menu) can be reclaimed: voting on issues like public education in November.