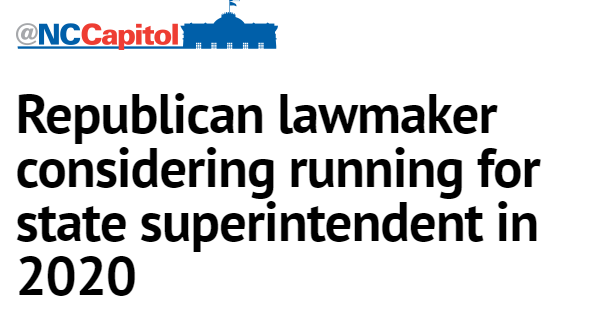 From Kelly Hinchcliffe at WRAL today:

A Republican lawmaker who chairs several education committees in the North Carolina General Assembly says he is considering running for state superintendent of public instruction in 2020.

Rep. Craig Horn, R-Union, has been thinking about joining the race for several weeks, he said, after educators and community members from both sides of the aisle approached him and asked him to run. If current State Superintendent Mark Johnson, also a Republican, decides to seek re-election, Horn said he probably won’t compete against him, but he won’t rule it out either.

One just has to look at the rather ignorant comments made by Horn in the last few years concerning issues affecting public schools or his voting record since 2011 to see that his possible term as a state superintendent would be nothing more than a rubber stamp of the very policies that have hurt our state’s public school system.

In response to what he called “overblown fears” concerning the new principal pay plan implemented for the 2017-2018 school year:

“Legislation is not an exact science. We do things that we think will help solve an issue.”

In a statement about the class-size mandate in early 2018:

“The gap is closing. There are folks that are working on a reasonable solution with the session coming as quickly as it is next week.”

In using per-pupil expenditure as a measure of the state’s commitment to public schools:

“As the teaching corps matures, the per-pupil expenditure — same number of students, same number of teachers — the PPE will go up,” Horn said. “I have a hard time, personally, using PPE as a benchmark of much of anything, quite frankly.”

“Involved in PPE are the fixed costs of running your school,” he said. “Well, if a school is built to hold 1,000 students and holds 700, your PPE is X. Just do the math. If your student population happens to go up to 800 or 1,000, your fixed costs are the same. Your PPE has gone down. But nothing’s really changed with regard to quality.”

In a statement concerning why charter schools in NC are not required to conduct lockdown safety drills like traditional public schools:

“I’m glad that you brought it up. There are lots of things we do that we don’t even know that we did,” said Rep. Craig Horn, R-Union, who serves as house education committee chair.

In a statement about the Rowan-Salisbury district becoming a pseudo-charter district:

“If you are looking at the state to be innovative, you’re looking in the wrong place,” state senator Craig Horn, R-Union, told a group of educators gathered at a NCICU Digital Learning and Research Symposium. Horn then pointed at Moody. “That person,” he said, “is innovative.”

Concerning Apple’s treatment of NC officials prior to a surprise multi-million dollar purchase of iPads in 2018:

And in a statement concerning why low-performing virtual charter schools should continue unabated in NC:

“To take a snapshot in time I think is unfair as well as inappropriate,” Horn said. “We should allow the virtual pilots to continue, allow parents to see whether or not this works for them.”

“That’s a simple place to hide,” state Rep. Craig Horn, R-Union, said. “’Oh, they don’t give us enough money, not my fault.’ It seems to me that we’ve got an accountability issue here.”

“If not, someone is going to, I am sure, introduce a bill that will require some type of penalty for those school districts that don’t meet minimum maintenance standards on their buses,” Horn said.

According to Rep. Craig Horn, our North Carolina General Assembly is full of lawmakers who look at legislating as an inexact science that comes up with unfunded and phantom solutions, that considers per-pupil expenditure as a bad measure of funding, that often forgets what it does, looks at educators as innovators yet does not invest in them, but wants to be treated as a body of professionals and adults.

Oh, and they favorably treat charters and virtual charters differently than traditional schools.

And just to be certain, the principal pay plan has still not been refined, the class-size mandate still has not been funded, there has been no transparency in how the state got money for iPads, the salary schedule for veteran teachers is still horrible, and the favorable treatment of virtual charters in NC is laughable.

Oh, and look at his voting record concerning:

One thought on “This Veteran Teacher Would Never Vote For Rep. Craig Horn As The State Superintendent For MANY Reasons”