Mark Johnson is running to be Lt. Gov. so that he can sit on the very state board of education that he literally fought against for almost two years in court over a power struggle.

His platform? No more Common Core.

And he finally has a website for his campaign – less than three weeks from the primary that may end his tenure in Raleigh. 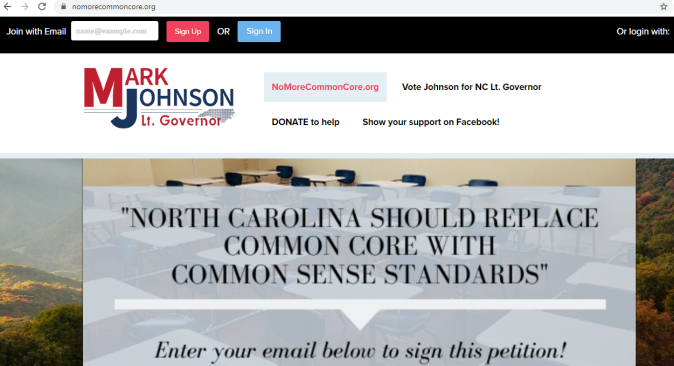 Or is it this?

Wait, he already had this one for his campaign: By making Common Core the focus of his two week campaign to become Lt. Gov., it makes one wonder why all of a sudden he is visiting an issue that he has had over three years to attack or did he forget 2017?

The official guideposts that determine what English and language arts skills students should acquire as they move through the grades are poised to change next year as the state moves away from the controversial Common Core standards.

Common Core already has been dealt with a lot in NC. In fact,

On Wednesday, DPI staff described the journey toward creating the proposed standards that started more than 18 months ago and involved soliciting comments from teachers, parents and others, and local district reviews. The changes incorporate recommendations from the Academic Standards Review Commission, the group the legislature created. In the rewrite, 284 of 463 standards were revised, with 125 of the standards undergoing major changes.

That “started more than 18 months ago and involved soliciting comments from teachers, parents and others, and local district reviews” is the part that’s funny to me.

If Johnson was going to use Common Core as his platform to run a two-week campaign for a primary with a website (s) that has maybe two layers, then maybe he should have had a better lesson plan.