Every year on March 21, the Down Syndrome International sponsors for the world community a WORLD DOWN SYNDROME DAY. You can read more about it here: https://worlddownsyndromeday.org/.

The date is a direct reference to genetic condition known as Trisomy 21 (three #21 chromosomes) which is commonly known as Down Syndrome.

But Malcolm does not think much about the fact that he has a little bit more genetic material than most people do. In fact, he could care less as long as he feels included just like other kids.

So Malcolm asked me to tell you that he wants people to more inclusive and accepting of what are really minors differences we all have because whether you have Down Syndrome or not, we are more alike than different.

That is unless you are not redheaded and blue-eyed like over 99% of the world which makes Malcolm part of rarest minority in the world in that regard.

And he wanted me to share some pictures of him that show how uniquely alike he is to other kids. 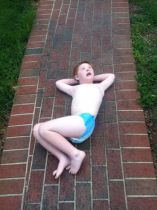 And here’s to the fact that Malcolm never really needs a special day to just be.

Any day will do.