And they’re not even being original because all of these supposed “re-forms” are nothing more than rehashed failed policies that profit a few and hurt the many.

Last month, a superintendent was chosen for North Carolina’s version of the Achievement School District that was put into place by “re-forming” legivangelists like Sen. Chad Barefoot and Sen. Jerry Tillman. If you do not know what a legivangelist is then here is a definition:

Legivangelist  – (n.) one who preaches to constituents about how holy his cause is in hopes of obtaining votes in elections  to maintain power over those he claims to help (further explanation can be found here: https://caffeinatedrage.com/2016/04/18/legivangelists-and-others-who-praise-the-lard/).

Remember the discussion that surrounded the implementation of a model that had not shown success in other states like Tennessee? Well, here’s a reminder from an earlier posting (https://caffeinatedrage.com/2016/06/29/outsourcing-our-kids-for-profit-rep-rob-bryan-and-sen-chad-barefoot-will-have-much-to-answer-for-in-the-future/).

“Neither Barefoot or Bryan could never really explain the “how the ASD will work” or the “why it will work”. They are simply appealing to their authority. They just tout that it will work in spite of all the results of past experiments and implementations ASD districts in multiple states, especially Tennessee whose model Bryan originally looked at to create the NC ASD proposal.

Lack of specificity is a tactic in making arguments. It hopes that people will get lost in the ambiguity of an explanation and simply rely on the speaker as being more equipped to make a decision because of a title or office held.

But lack of specificity is also a sign of not really knowing the answers. It’s like when you ask a question of someone and what he doesn’t say speaks as loudly as what he does say.

Take for instance the explanations given by Sen. Barefoot when pressed for specificity in a meeting for HB1080 (the ASD bill) chaired by Sen. Tillman as reported by Billy Ball (http://pulse.ncpolicywatch.org/2016/06/24/senate-committee-approves-controversial-charter-takeover-of-low-performing-schools/).

Barefoot calls the ASD model for NC an “innovative solution.” But when others in the meeting bring up that there really have not been positive outcomes from other ASD implementations, Barefoot just says that we will make it work because we are NC (the geographical cure).”

Since then more has happened to the Memphis branch of the ASD program in Tennessee concerning audits, which Sen. Barefoot should be aware of since he is so intent on making sure that all public schools show what they do with every cent given to them while allowing charter schools to operate in the state without as much transparency or vouchers to be tracked for effectiveness in religious school like Trinity Christian in Fayetteville.

But that is just regressing.

Either way, there has been no revelation of the new Carolina approach to the ASD except that it will include a small amount of schools that will be taken over by for-profit entities from outside the state.

If one was a betting individual and wanted to gamble public money on failed schemes like education reform efforts enacted here in NC, then maybe one of those companies is Charter Schools USA out of Florida run by Jonathan Hage, who is an avid campaign contributor to politicians like Sen. Jerry Tillman. 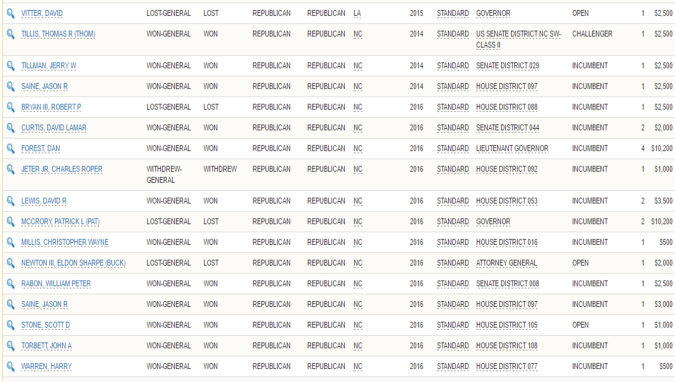 These names are not unfamiliar in the “re-form” movement here in NC.

And their actions are not original. They are plagiarized.

Take for instance House Bill 800. That’s the so-called “Jobs’ Bill” introduced by Sen. John Bradford this past week that would allow for businesses who help finance a part of a charter school to claim up to half of the allotted enrollment of the charter school for children of their employees.

Recently Greg Flynn out of Raleigh tweeted the following on April 26th. 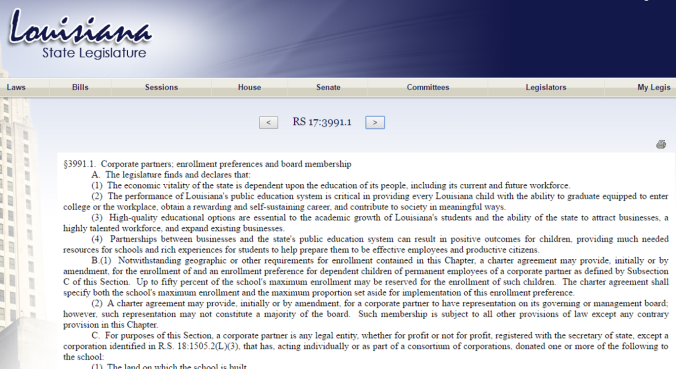 Interestingly enough, Sen. Bradford’s name, while not on Hage’s preferred list of campaign contributions, is familiar.

He was one of the primary sponsors of the ASD bill that helped to spur the creation of our NC district (http://www.ncpolicywatch.com/2016/06/03/tempers-flare-as-controversial-achievement-school-district-bill-clears-house/).

So with a model of a failed experiment from Tennessee (ASD) which was actually being lobbied by a conservative Oregonian backer being that was co-sponsored by a man who received funds from a Florida charter school executive was also co-sponsored by another state lawmaker who looked to a privatizing scheme from Louisiana to introduce another charter school bill.

Wow! If you want to read more about that Oregonian connection, refer to this – http://www.ncpolicywatch.com/2015/08/13/out-of-state-money-behind-secret-plan-to-fund-charter-takeover-of-ncs-worst-performing-schools/.

Then there was this gem of a bill that was introduced – HB514: The Permit Municipal Charter School / Certain Towns Bill.

Or otherwise known as segregation.

Sen. William Brawley, a commercial real-estate broker from Matthews (and also represents Mint Hill) introduced HB514 so that his district which is predominantly white (Mint Hill is 73% and Matthews is 78% white) to set up its own charter schools within its city limits to serve its students in an effort to keep them away from a predominantly black school district it already resides in – Charlotte / Mecklenburg. Read Kris Nordstrom’s report for better explanation: http://pulse.ncpolicywatch.org/2017/04/26/flurry-house-charter-school-bills-facilitate-segregation-north-carolinas-schools/#sthash.Wa3GCLPC.whzD62t5.dpbs.

That idea isn’t really plagiarized from a certain state or geographical location.

Nordstrom also mentions a bill that would allow for the state to examine ways to break up larger school districts and make them into smaller ones. That bill, HB704, is sponsored by both Brawley and Bradford, two senators who make a living on real estate and the value of the land they sell and develop.

And nothing drives the value of land like the schools that service that area.

If lawmakers in North Carolina wanted to “copy” good reforms, they don’t really need to look that hard.

That’s what should be plagiarized.

But alas, too many in Raleigh have confused mixing business, money, greed, politics, and public education with “doing the right thing” as public servants.

Two and ½ hours in a car on the highway if you are barely breaking the speed limit on an interstate.

160 miles is also the radius for the strongest aftershocks for the GOP earthquake called HB2 whose epicenter lies beneath West Jones Street in Raleigh.

This past Friday the newspaper in Roanoke, VA, The Roanoke Times, wrote on their editorial page under the title “Our view: Ballot selfies and other election thoughts” the following:

“Which candidate would do the most to help our local economy? That’s easy. It’s Pat McCrory, the Republican governor of North Carolina, who’s seeking his second four-year term in the November election. We can point to specific and multiple ways he has helped the economy — our economy. North Carolina panicked and made a spectacle of itself by passing HB2, its so-called “bathroom bill.” In response, various companies and even sports leagues pulled events from the state. Three of those have wound up in Salem — the NCAA Division III men’s and women’s soccer championships, as well as the Division II Central Intercollegiate Athletic Association football championship. That’s money in the bank for us.

McCrory has given Virginia a competitive advantage in economic development, as well. When the University Economic Development Association recently held its national conference in Roanoke, the keynote speaker highlighted a North Carolina program to encourage partnerships between colleges and companies, as a way help recruit technology companies interested in research and development. The speaker hailed it as a model for other states to follow as they try to build a “knowledge economy.” Then the speaker noted that McCrory had cancelled it. The pro-business audience groaned.

On Monday, a data company picked Richmond as the site for a new office, with 730 jobs. Industry officials said it beat out Charlotte specifically because of HB2.

Feel free to argue all you want which presidential candidate would be best, but it’s clear that Virginia would be best served if North Carolina re-elected McCrory” (http://www.roanoke.com/opinion/editorials/our-view-ballot-selfies-and-other-election-thoughts/article_bb97e9ce-ff92-580e-8b8b-6d3390b921b1.html)

It was not really that satirical. It seems very sincere in some ways.

To be endorsed because of how bad your policies are in your home state and that you are driving jobs and economic development into another state might be one of the strongest remarks ever delivered concerning HB2.

Roanoke is about 160 miles from Raleigh.

Then there was that time this past month when Gov. McCrory’s hometown newspaper The Charlotte Observer openly explained why it was not endorsing the governor for the first time in over 25 years (http://www.charlotteobserver.com/opinion/editorials/article108338327.html). It begins,

“The Charlotte Observer’s editorial board has endorsed Republican Pat McCrory in every one of his bids for office since 1991. That includes twice for City Council, seven times for mayor and twice for governor. That streak comes to an end today.

McCrory’s term as North Carolina governor is the ultimate illustration of the Peter Principle: that people are promoted based on their past performance and not the abilities needed for the new role and thus rise to the level of their incompetence. McCrory has certainly done that.”

It is a stinging piece of truth from the town that was first targeted by the “bathroom bill.”

Charlotte is about 160 miles from Raleigh.

Then there was the News & Observer on October 17th which ran full page news ad for a group called the Writers for a Progressive North Carolina who proved the McCrory that on your 60th birthday, you could have your cake and eat it too.

The News & Observer is about a 160 second drive from West Jones Street in Raleigh.

The 160 mile radius that surrounds the governor’s mansion engulfs a wide swath of the state. To feel strong aftershocks in places like Roanoke and Charlotte, there’s no telling what the people within 160 miles of Raleigh are feeling. Places like:

And to think that this area within the 160 mile radius has the largest amount of voters in the state.

Imagine the aftershock on November 8th.