An article appeared this morning in my hometown newspaper, the Winston-Salem Journal, that highlights the call by two left-leaning organizations for Sen. Richard Burr of North Carolina to recuse himself from confirming Betsy DeVos as Trump’s Secretary of Education.

“Two Democratic-leaning organizations said Friday that U.S. Sen. Richard Burr, R-N.C., should recuse himself from voting on Betsy DeVos as President-elect Donald Trump’s nominee for education secretary because she and relatives contributed money to his campaign.

DeVos and relatives contributed a combined $43,200 during the 2016 election cycle, according to a review by the Winston-Salem Journal of reports filed by the Burr campaign with the Federal Election Commission” (http://www.journalnow.com/news/local/critics-call-for-u-s-sen-richard-burr-to-recuse/article_6d9b6f53-b677-5a1d-a68b-1c0961b1aa7f.html).

Sen. Burr is on the high ranking U.S. Senate Committee on Health, Edcuation, Labor and Pensions, ironically called help. Its members are from both parties. The following are the members of the committee.

Now look at the following graphic that was forwarded to me and I have since found it on mothercrusader.blogspot.com. Her piece on the DeVos is fantastic. 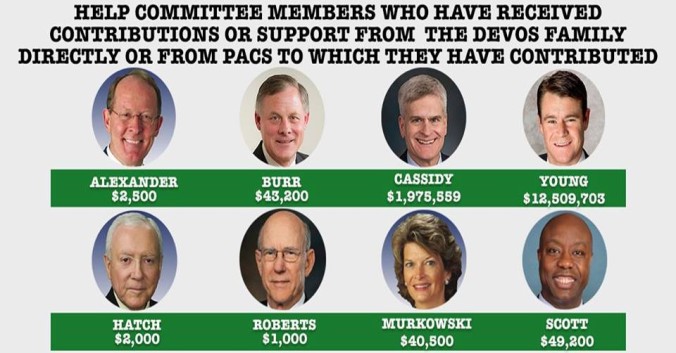 Eight of the twelve republicans on the committee have received financial contributions from DeVos. Cassidy makes most all the others look insignificant. But look at Young!

And those political actions committees (PACS) associated with DeVos and her family are rather numerous, and PACS were allowed through the actios of the Supreme Court through the Citizens United decision.

The following is a now-common, but verified, table of the DeVos family connections to PACS. 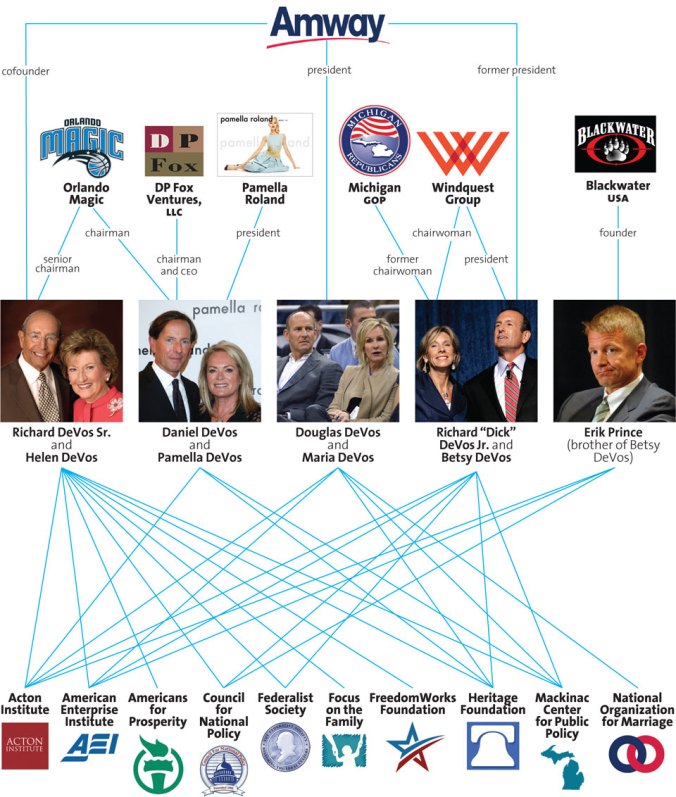 Makes you think a little about Citizens United and the Supreme Court?

Now before you talk about the fact that in the past there have been appointees from both parties who have been major donors or fundraisers, then consider this quote that Gutierrez includes in his story.

“In 1997, in the Capitol Hill newspaper Roll Call, DeVos said that she had “decided to stop taking offense at the suggestion that we are buying influence.

“Now, I simply concede the point.

“We expect to foster a conservative governing philosophy consisting of limited government and respect for traditional American virtues. We expect a return on our investment; we expect a good and honest government. Furthermore, we expect the Republican party to use the money to promote these policies, and yes, to win elections,” DeVos said.

Will that be in a civics textbook?