Oddly enough, I found this fake letter absolutely nowhere on the internet, but if it did exist it might sound like…

I cannot thank you enough for your confirmation vote this past week as I strive to continue my quest of taking public money from taxpayers and finance more unregulated charter schools and blindly give out vouchers for religious schools.

Thank you for looking past my lack of experience and confusion that became so evident in the hearing in front of the Health, Education, Labor, and Pensions Committee. Your help with the H.E.L.P. was really helpful.

Thank you for understanding that my lack of skills with grammar and usage directly corresponds to my ability to run a branch of government. 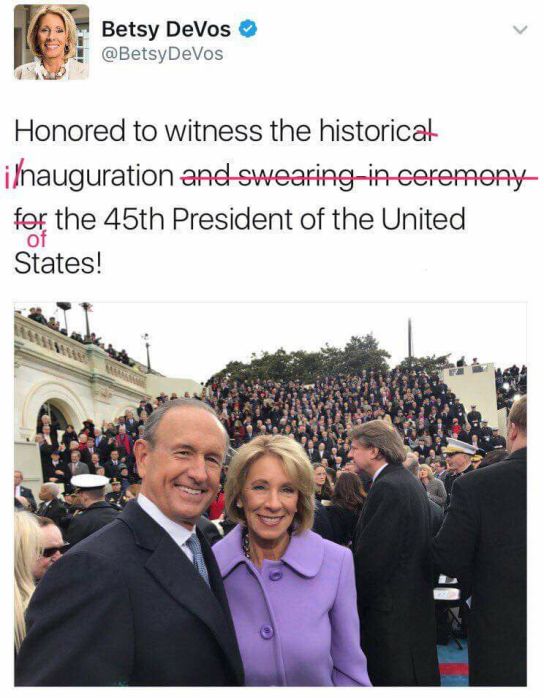 Thank you for overlooking the fact that I forgot that the Individual with Disabilities Education Act was a federal mandate because as you know I tend to prefer to help children who only worship God as I see him.

“So were you unaware when I just asked you about the IDEA that it was a federal law?” Hassan asked.

“I may have confused it,” DeVos said.

Thank you for supporting me in my quest to arm schools against grizzly bears because I know that your state is just like Utah and has lots of bears who commonly roam classrooms to seek another meal like Satan seeks another soul.

Thank you for understanding that my financial support of groups that believe in conversion therapy for LGBT people is very important to me. I mean look at that bathroom law you have in North Carolina.

“Foundations run by her parents and her husband’s parents have donated hundreds of thousands of dollars to Focus on the Family, a group that’s promoted damaging gay ‘conversion therapy’ and called homosexuality ‘preventable and treatable.'”

“A foundation run by her husband’s brother and sister-in-law donated $500,000 to the antigay National Organization for Marriage, and a foundation run by DeVos and her husband has donated more than $100,000 to the Institute for Marriage and Public Policy. DeVos’s late father, Edgar Prince, helped found the Family Research Council; her mother, Elsa Prince Broekhuizen, sits on the boards of the FRC and the Acton Institute, which sponsored a conference held by an antigay hate group.” – Randi Weingarten.

But most of all, thank you for taking my maximum contributions to your reelection campaign and proving that you can be bought.

Because when I said,

“We expect to foster a conservative governing philosophy consisting of limited government and respect for traditional American virtues. We expect a return on our investment; we expect a good and honest government. Furthermore, we expect the Republican party to use the money to promote these policies, and yes, to win elections,”

I hope the Senate is as easily fooled and as weak as you when it comes to standing up for public schools.

2 thoughts on “A Thank You Letter From Betsy DeVos to Sen. Richard Burr”