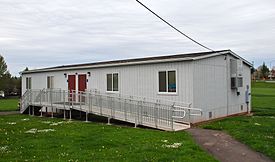 A recent report from WRAL brought again to mind the efforts that you specifically have made to handcuff school districts in meeting class size requirements without fully funding public schools.

The foreseen problems of the folly that was the HB13 bill you shepherded are now manifesting themselves, specifically in Wake County.

Traditional-calendar students in Wake County head back to school in less than three weeks, but before welcoming kids back, school leaders are trying to figure out how they’ll handle a new state mandate for smaller class sizes.

“That’s a bunch of seats we are going to have to find,” said Wake County school board member Bill Fletcher (http://www.wral.com/calendar-changes-trailers-may-help-wake-schools-meet-new-class-size-requirements-/16869575/).

When that bill was being discussed, you made an interesting comment that I would like to revisit. You said,

“For years, the General Assembly has been sending tens of millions of dollars to districts for new classroom teachers for the purpose of lowering classroom sizes,” he said. “The question we keep asking over and over again is, ‘What did they do with the money? …The data that we have received from the districts varies, and some districts did not fully respond to our information request. What some of the data has shown is that there are districts that did not reduce class sizes with the funding we sent them. Why are they holding art and PE teachers’ jobs hostage for their misallocation of classroom teacher funds?” (http://www.wral.com/law-reducing-class-size-has-music-art-pe-teachers-anxious-about-future-/16628678/).

Well, apparently what is about to happen is that districts such as your home district of Wake County will have to use the money to buy trailers and carts.

Back to the WRAL report:

Of the 113 elementary schools in Wake County, most would be able to make changes to create enough additional space, but about 20 schools said they have no room to spare.

Possible solutions for those 20 schools include restructuring the schools or school assignments, adding trailers, moving fifth grade students to middle schools or moving schools to a multi-trackcalendar.

“It is not a preferred way to provide that kind of instruction. It can be done,” Fletcher said. “There are lots of possibilities. Nothing has been decided yet.”

In essence, Wake County will have to change the time/space continuum to make things compatible all while having to deal with a massive budget gap that government officials are not helping with, especially the ones on West Jones Street.

You asked back in the spring, “What did they do with the money?” Well, you can now see what they will have to do with the lack of money and space and resources.

Instead of schools having to report to you, why don’t you be a representative and go to them? Go to those 20 schools that Mr. Fletcher mentioned and see what is having to be done because of your insistence on standing on platitudes rather than dealing with your constitutionally sworn duty to fully fund public schools and protect all classes including the specials.

And before you go, you could maybe try and understand what some of these schools have to deal with.

So the next time that you and your cronies decide to call for another special session, instead of meeting on West Jones Street, meet with your caucus in a trailer “off campus” that has shaky reception for internet, no bathroom, or stable temperature control.

Have some of the members of your caucus sit on the floor because there will not be enough desks. In fact, do it when it is raining.

But before you have that special session, make sure that whoever is leading the meeting turns in a lesson plan that fully implements all provisions of the state constitution and how they are being met. And expect a test on what is covered because it will be over half of the immeasurable data that will go into your approval rating.

And the money that is needed to fund your special session? It will be determined by a body of people who have no idea of what you are doing and actually think that what you do is not important.

Then you might have an idea of what happens when personalities are honored more than principles.