In one part of the disastrous interview that Secretary of Education Betsy DeVos did with Lesley Stahl of 60 Minutes, DeVos revealed what many public school advocates have been screaming about for over a year – DeVos has no concept of what public schooling is really about.

Below is the transcript of that segment.

Lesley Stahl: Okay. But what about the kids who are back at the school that’s not working? What about those kids?

Betsy DeVos: Well, in places where there have been– where there is– a lot of choice that’s been introduced– Florida, for example, the– studies show that when there’s a large number of students that opt to go to a different school or different schools, the traditional public schools actually– the results get better, as well.

Lesley Stahl: Now, has that happened in Michigan? We’re in Michigan. This is your home state.

Lesley Stahl: Have the public schools in Michigan gotten better?

Betsy DeVos: I don’t know. Overall, I– I can’t say overall that they have all gotten better.

Lesley Stahl: The whole state is not doing well.

Betsy DeVos: Well, there are certainly lots of pockets where this– the students are doing well and–

Lesley Stahl: No, but your argument that if you take funds away that the schools will get better, is not working in Michigan where you had a huge impact and influence over the direction of the school system here.

Betsy DeVos: I hesitate to talk about all schools in general because schools are made up of individual students attending them.

Lesley Stahl: The public schools here are doing worse than they did.

Betsy DeVos: Michigan schools need to do better. There is no doubt about it.

Lesley Stahl: Have you seen the really bad schools? Maybe try to figure out what they’re doing?

Lesley Stahl: Maybe you should.

Betsy DeVos: Maybe I should. Yes.

It is no secret that DeVos favors school choice, charter schools, and vouchers for private and parochial schools. But what many who may have voted for her boss may not realize is that DeVos ignores what is happening to the traditional public schools that service over 90% of our nation’s students.

Think about when DeVos says, “I hesitate to talk about all schools in general because schools are made up of individual students attending them.”

Actually, schools are really communities, but if anyone has “generalized schools,” it has been DeVos. The day of the 60 Minutes interview, DeVos had more than usual activity on her Twitter account. Maybe knowing her words from the interview were not as stellar as she would have hoped, she may have tried to lessen the blowback with this tweet.

Look at that map more closely. 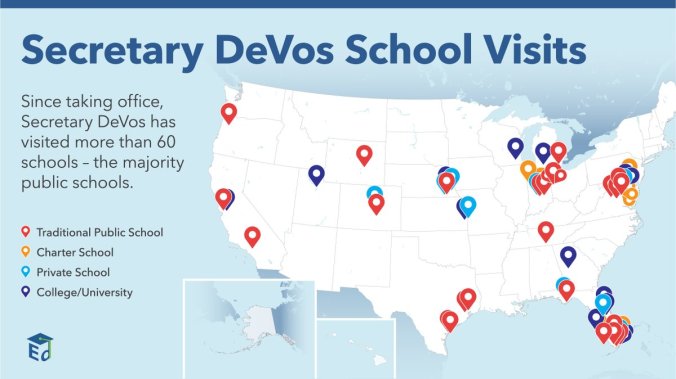 She seems to really like Indianapolis, Washington D.C., and southern Florida. Rather, she likes to go where Mike Pence did more to privatize schools than most any governor in recent history. She likes to go to Florida where there is an abundance of “school choice” endeavors. She also likes the D.C. area that is still reeling from the Michelle Rhee high-stakes testing and value-added frenzy.

DeVos also tweeted on that day the following:

DeVos has been in office for a little over a year. But her efforts to reform education in Michigan have been happening for years

Part of Stahl’s interview focused on Michigan, a state where DeVos not only hails from but has used as an experimental lab for her amorphous policies. DeVos could not even talk about how well Michigan was doing. She surely would like to be able to brag about Michigan but good journalism sometimes gets in the way.

From the Detroit Free Press in a report entitled “Michigan test score gains worst in nation” from Feb. of 2017:

A new analysis of results of a national educational test shows Michigan students have continually made the least improvement nationally of scores since 2003.

The study, by University of Michigan professor Brian A. Jacob, of scores of the National Assessment of Education Progress (NAEP), also found that Michigan students were at the bottom of the list when it comes to proficiency growth in the four measures of the exam (https://www.detroitnews.com/story/news/local/michigan/2017/02/20/michigan-test-score-gains-worst-nation/98144368/).

That lack of growth in a state where DeVos already has been enacting the policies that she is trying to force on the country? From a person who admittedly does not want to visit “underperforming” schools?

There could be a variety of reasons why DeVos does not want to visit what she terms to be underperforming schools. She could deathly afraid of what she perceives they may be like. She is afraid that she would have to answer questions on why many are so underfunded. She would have to display a knowledge of education to offer some sort of leadership to help those schools that she obviously does not have.

Or it could be all of those. Plus others.

But maybe the most obvious reason could be that she does not really know how to measure schools. If what she claims are the necessary ingredients for good equitable schools have not been working in her home state as she thinks they have, then how could she even begin to understand the dynamics of “underperforming” schools.

Ignorance and a fear of engaging authentically with people will make even the most educated of people unable to be authentic educators. And the national leader in education should be more than willing to go into any school.

But Betsy DeVos is no leader.

She sure as hell is no educator.