From last Sunday’s interview with Betsy DeVos by Lesley Stahl on 60 Minutes:

Lesley Stahl: But that really isn’t true. Test scores have gone up over the last 25 years. So why do you keep saying nothing’s been accomplished?

Betsy DeVos: Well actually, test scores vis-à-vis the rest of the world have not gone up. And we have continued to be middle of the pack at best. That’s just not acceptable.

Betsy DeVos: But I don’t think they have for too many kids. We’ve stagnated.

The embarrassment of that entire interview could be felt by even DeVos’s most ardent detractors, but the amount of tweets that DeVos sent the following two or three days were nothing more than damage control. 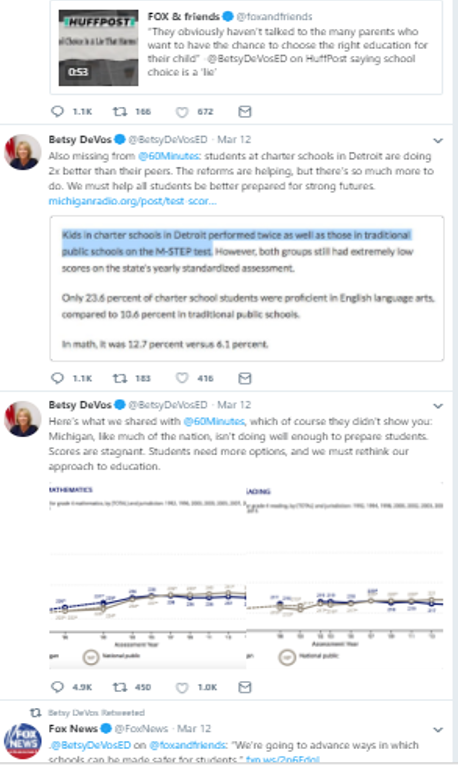 But it was a tweet from a week before that DeVos alluded to in her interview with Stahl that shows DeVos’s purposeful ignorance of what really happens in public education.

Simply put, DeVos is and has chosen to remain uneducated about education.

That’s in reference to the test commonly referred to as the PISA. What DeVos gets wrong is that we as a country are not average. We actually do very well when one considers the very things that DeVos is blind to: income gaps, social inequality, and child poverty.

Bob Herbert wrote an iconic book published in 2014 called Losing Our Way. He explored three different facets of our country that are foundational but are deteriorating because we as a country are not investing in truly remedying them but rather politicizing them. One he talks about is public education.

In the chapter “Poverty and Education”, Herbert discusses a study by Richard Rothstein and Martin Carnroy entitled “What do international tests really show about U. S. student performance?” Published by the Economic Policy Institute, the researchers (as Herbert explains on page 155 of his book), “made a detailed study of the backgrounds of the test takers in an extensive database compiled by the Program for International Student Assessment (PISA).

From that actual report (and I would encourage any reader to take a look):

Because social class inequality is greater in the United States than in any of the countries with which we can reasonably be compared, the relative performance of U.S. adolescents is better than it appears when countries’ national average performance is conventionally compared.

The entire report can be found here: https://www.epi.org/publication/us-student-performance-testing/.

DeVos should maybe take a look at that report. In fact, she should read Bob Herbert’s book.