While evoking the paraphrased words of the NRA’s Wayne LaPierre, Rep. Larry Pittman once again is calling for more guns to be in our schools.

And this call had some extra extremism added to them. 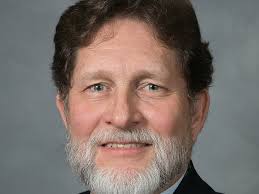 From an email he sent to all NCGA members on April 16th:

“We need to allow teachers, other school personnel and other citizens, who are willing, to be screened and to receive tactical training and bring their weapons to school, in cooperation with local law enforcement who would need to be informed as to who is doing this.  We should give them a fighting chance.  Otherwise, when they die, and children die whom they could have defended, their blood will be on our hands.  I cannot accept that.  I hope you will think this through and find that you cannot accept it, either.”

“Blood on our hands.” That’s what he said.

“Blood on our hands.”

Ironic that a pastor/extreme guns’ rights activist asked for people to be screened but still be against gun control laws that call for “screening” of potential gun buyers.

“What we must not do is to allow ourselves to be misguided by emotionalism to enact further gun control laws that violate the Second Amendment and the rights of honest citizens.  Such new gun control laws will not solve the problem.  They will only leave good people defenseless, when the best way to stop an evil person with a gun is a good person with a gun.  We will help nothing by violating the rights of 18-20 year old citizens or discriminating against a certain set of long guns simply on the basis of their cosmetic appearance.”

That was in reference to a Facebook comment on another user’s post.  Pittman and his apparent “emotionalism” speculated the Florida shooter was part of a conspiracy to “push for gun control so they can more easily take over the country” (http://www.newsobserver.com/news/politics-government/politics-columns-blogs/under-the-dome/article200294174.html).

Pittman didn’t even give LaPierre credit for the use of a “zero-sum” fallacy. Besides, most teachers in this state who have been polled think that having a “good guy” with a gun is another way of endangering more people.

Let it not be lost that Pittman is an ordained Presbyterian minister. From the NRA to the pulpit to the General Assembly to the email inbox of many, what Pittman is doing is literally shilling more guns for the gun lobby.

It is hard to not look at Pittman as a “man of God” and not want to tell him that he already has “blood on his hands.”

It seems that many politicians like Pittman who claim to be hardline “pro-lifers” are helping to privatize the very institutions that are giving “life” to many individuals. As a representative, it would seem like Pittman would want to support more actions that would give life to so many.

We are in a state where almost 1 in 4 children live in poverty. What has Pittman as a lawmaker done for that? Created a surplus while cutting taxes for those the highest earners?

Did Pittman preserve life by voting to expand Medicaid to many in the state? No. He let our citizens continue to pay money to the federal government to help finance other states’ Medicaid program.

Did Pittman vote to punish those companies that hurt water supplies for those who have to use that water for living?

Lack of medical care, shelter, food, and basic resources kill people. That’s blood on someone’s hands. The Jesus that I think Pittman refers to would not like that.

I would have a hard time thinking that Jesus would not confront politicians and call them out for their hypocrisy in not defending or helping take care of those who needed aid.

The Jesus I know called out the Sadducees and the Pharisees for their self-righteous ways.

The Jesus I know did not canvas for votes. He came to help all of us no matter race, gender, or physical ailment.

The Jesus I know preached and practiced the Golden Rule through his actions and not his emails.

That’s not what Pittman is doing.