Oliver North is the incoming president of the NRA.

Lt. Gov. Dan Patrick is an NRA member and the second-in-command in the state of Texas.

Larry Pittman is a “man of God” and also a member of NRA. He also happens to be a representative in the North Carolina General Assembly as is Rep. Mark Brody who happens to have an “A” endorsement fro the NRA.

All four of these gentlemen in the spring made rather interesting assertions about either the need for more guns in schools (arming teachers) or the need for teachers to be more submissive to a rather punitive job description of teachers that opposes collective bargaining.

In the aftermath of the school shooting in Santa Fe, Texas, Oliver North was quoted as saying that the problem is too many “drugged” students.

Incoming NRA President Oliver North said the cause of such attacks is youngsters who have been “drugged in many cases.”

“Many of these young boys have been on Ritalin since they were in kindergarten,” North told Fox News Sunday (https://www.cnn.com/2018/05/20/us/malala-sabika-different-reactions-trnd/index.html).

This coming from the man who was found guilty of selling arms to militants in a country from whom we just pulled out of a nuclear arms agreement. That country, Iran, now says it will begin enriching uranium again.

Lt. Gov. Dan Patrick stated in a press conference after the Santa Fe shooting many things that he thought could curb violent attacks at schools.

Texas GOP Lt. Gov. Dan Patrick said after the nation’s latest school shooting in Santa Fe, Texas, that teachers need guns, parents should secure firearms safely at home, and schools should eliminate some of their entrances.

“We need our teachers to be armed,” Patrick said Sunday on CNN’s “State of the Union” (https://www.cnn.com/2018/05/20/politics/texas-dan-patrick-cnntv/index.html).

Those two national figures seem to have pinpointed the phantom problems: Ritalin and too many doors. Blame the doctors, the architects, and the engineers. And don’t forget the teachers themselves.

Speaking of medicating for ADHD, take a look at Sir Ken Robinson’s TED Talk called “Changing Education Paradigms.” It’s simply fantastic. In it he talks about the rise of ADHD diagnoses and the rise of prescriptions for Ritalin. 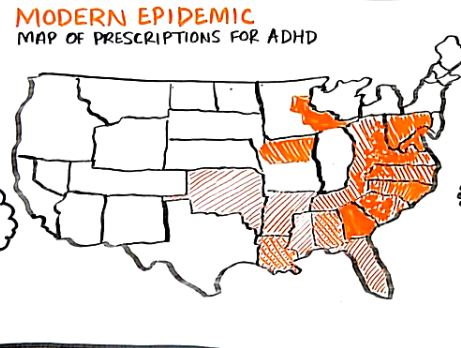 If Ritalin really is the problem here as Oliver North would want to portray, then North Carolina might be absolutely one of the worst places to teach. In fact, if you are teacher in a NC public high school, you are already in an everlasting high-alert “tornado watch” for violence.

But according to some NC lawmakers, the problem actually is more focused on a certain subsection of the public school population.

That is from Rep. Larry Pittman, an ordained minister, who called for arming teachers in North Carolina to avoid having “blood on their hands” (https://caffeinatedrage.com/2018/04/18/rep-larry-pittman-jesus-would-never-have-sent-that-email-concerning-arming-teachers/). This coming from a man who did not expand Medicare to children living in poverty in NC. That number is over %20 of all the state’s children.

This echoed Lt. Gov. Patrick’s call for arming teachers, but a fellow NC lawmaker said that teachers were “thugs” in a Facebook comment talking about the NC teacher protest on May 16th which brought thousands of people to the capital for a day of advocating for schools including safety.

Arming “thugs” in NC to protect schools with too many doors from people drugged up with Ritalin who may have fallen prey to the ideology of communist democrats in a state controlled by republicans.

If there ever was an argument to be made for raising teacher pay these four men just made it. It’s called hazard pay. But there is a premise that is incorrect here. If anything, the way that lawmakers have “assaulted” public schools, it seems to be that what teachers are really doing is trying to protect students and schools from the people trying to protect the gun-industry.

In all of their statements, these four white male, God-fearing lawmakers never talk about gun control measures, legislation that could save schools and students.

That irony is not lost on everybody.

Blaming the recent surge of school shootings on free-thought protected by the amendment that comes before the Second, prescribed medications, and architectural designs rather than lax gun laws can only point to one very important point – our lawmakers have a huge problem in actually confronting the truth if it does not have a large PAC associated with it.