“As with any relationship it starts with open and regular communication. It is about listening more than talking. Candidly we all need to learn how to check egos and power struggles at the door. These are major barriers. We do not always play nice in the sandbox together. Both sides need to understand and respect the responsibility and roles each has in serving our residents.” – Senator Jeff Tarte, October 18th, 2016 in the Charlotte Observer (http://www.charlotteobserver.com/news/politics-government/election/article109088982.html).

Surely many North Carolinians have heard about the surreptitious manner in which the current budget is being pushed through the General Assembly to avoid having it debated and discussed openly.

Using the nuclear option, GOP leaders have shunned having any amendments added. But at least they could have proofread this budget. Having this provision edited out of the released document probably would have been a good “amendment.”

One doesn’t want to say he is being transparent when that is obviously is not the case.

But having more eyes on a document may not only help to eliminate “unwanted” wording; it can also help to make sure that what is written is actually correct.

Rep. Jeff Tarte (R-Meck) wrote in a provision that would actually have the state fund a DonorsChoose.org initiative to help buy supplies for schools in his district.

Not other districts. His district.

He literally is getting the state to fund schools in his district in a hotly-contested election cycle through a non-profit that takes a portion of the funds for overhead. But DonorsChoose.org does not actually condone this type of “fundraising.”

Maybe making this budget more open to discussion would have saved the state some of this embarrassment, but what might be most embarrassing is that Rep. Jeff Tarte might have actually clashed with one of his biggest supporters, the Civitas Institute.

Here is a list of the five most “conservative lawmakers” according to the Civitas Institute as noted last summer (https://www.nccivitas.org/2017/civitas-action-unveils-2017-state-legislative-rankings/) .

“Civitas Action would like to commend Rep. Chris Millis for having the only perfect score in the House. Meanwhile, we congratulate the five Senators who earned a perfect score: Jim Davis, Ralph Hise, Wesley Meredith, Jeff Tarte and Jerry Tillman,” said Civitas Action President Francis De Luca. “We are also encouraged to find that this year’s Senate overall average score is higher than last year’s but disappointed that the House’s overall average dropped.”

That’s a little funny because last year on June 29th, Bob Luebke shared on the Civitas Institute website in a missive entitled “Schools, Parents – and School Supplies” a rather caustic perspective on the plight of many a public school trying to help provide for students in need.

A friend recently forwarded the email listed below.  It’s to parents from the principal at Holly Grove Middle School and is like thousands of other emails that schools send out to parents throughout the school year asking them to contribute or help out with some activity at the local school. 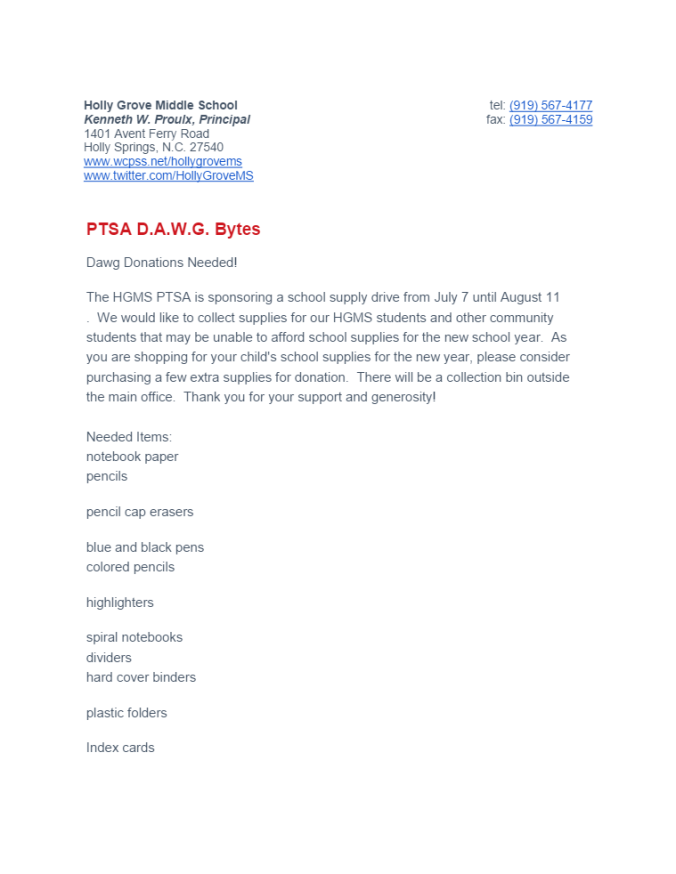 This email asks parents to bring additional school supplies to the school for others. Specifically:

First, let me say I am all for helping those in need. Doing so is our duty.

But let’s remember the school is making this request. Last I checked Wake County Public Schools have $1.4 billion budget. The new budget for 2017-18 is $1.6 billion, including $455 million from the county and a record $45 million budget increase.

That said, a question comes to mind.

The letter asks parents to “consider purchasing a few extra supplies for HGMS students and other community students unable to afford school supplies for the coming year.”

If HGMS or WCPSS does not have on hand any of the suggested supplies that they are asking parents to buy, what school supplies does the school buy with its approximately $71 per child budget?

Asking parents to pitch in is one thing. It’s quite another to ask because taxpayer money is not being spent wisely.

Passing a tin cup for such needs in a billion-dollar school district irks many parents and propels the false narrative that WCPSS schools are financially strapped.

If I’m wrong, someone show me. If not, it should stop (https://www.nccivitas.org/civitas-review/schools-parents-school-supplies/).

So what would Leubke say about this?

One thought on “The Need For “Tarte” Reform in Mecklenburg County”