When Duke University’s Children’s Law Center’s released its March 2017 report called SCHOOL VOUCHERS IN NORTH CAROLINA : THE FIRST THREE YEARS one of the most glaring aspects of the program was how many vouchers were being used at religiously affiliated schools.

Some of the observations of the study included:

The entire report can be found here:  https://law.duke.edu/childedlaw/School_Vouchers_NC.pdf.

Many public school advocates, especially the teacher who writes this blog, have argued that the Opportunity Grants are a detriment to public schools in that it takes public money meant for public schools and gives it to private, unregulated entities which can practice admission standards that would never be allowed in public schools and can offer curricula that is not aligned with preparing students for 21st success.

It also strikes this teacher that 93% of vouchers used in NC when the Duke study was published goes to entities that are affiliated with churches and are probably housed in churches that do not have to give tax dollars due to religious exemptions.

In Texas, there is a group of religious leaders who have formed a rather formidable presence in the state called Pastors for Texas Children (http://pastorsfortexaschildren.com/). And they are pro-public education! And they have been very influential. Dr. Diane Ravitch frequently talks of them in her iconic blog. They are against vouchers and other efforts of privatization. And they are active.

The group’s mission is to address problems such as underfunded public schools and programs.

Allison Mahaley chairs the organization’s public education committee and says the hope is the needs faith communities currently address can be dealt with at their root.

“What we want them to do is to keep doing that work, but to also realize that unless we advocate for changes in the public school at the policy level, there’s no end to the charity that will be required,” she states (https://www.publicnewsservice.org/2018-06-18/education/the-good-book-supports-public-education-say-church-leaders/a62926-1).

They even have a billboard on I-40 near Faison: 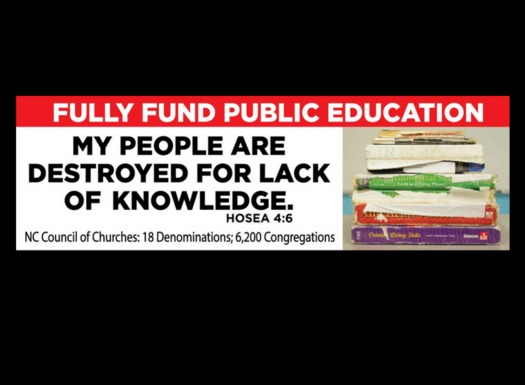