Our public schools are better than you may think.

With the constant dialogue that “we must improve schools” and the “need to implement reforms,” it is imperative that we as a taxpaying public seek to understand all of the variables in which schools are and can be measured, and not all of them are quantifiable.

Those who control the dialogue in North Carolina and in many other states only tell their side of the spin and neglect to talk of all of the variables that schools are and should be measured by. 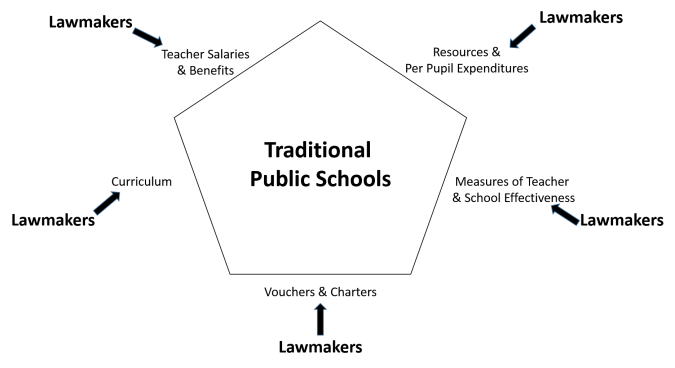 All of the external forces that affect the health of traditional public schools generally are controlled and governed by our North Carolina General Assembly, rather by the supermajority currently in power.

The salaries and benefits that teachers receive are mandated and controlled by the NCGA. When graduate degree pay bumps and due-process rights were removed from newer teachers, that affected recruitment of teachers. When the salary schedule became more “bottom-heavy” for newer teachers, it affected the retaining of veteran teachers.

With the changes from NCLB to RttT, from standard Course of Study to Common Core, from one standardized test to another, and from one curriculum revision to another, the door of public school “requirements” has become an ever-revolving door. Add to that the fact that teachers within the public schools rarely get to either help create or grade those very standardized tests.

North Carolina still spends less on per-pupil expenditures than it did since before the Great Recession when adjusted for inflation. Who has control of that? The North Carolina General Assembly.

Within the next ten years, NC will spend almost a billion dollars financing the Opportunity Grants, a voucher program, when there exists no empirical data showing that they actually improve student outcomes. Removing the charter school cap also has allowed more taxpayer money to go to entities that do not show any more improvement over traditional schools on average. When taxpayer money goes to vouchers and charter schools, it becomes money that is not used for the almost %90 of students who still go to traditional public schools.

And just look at the ways that schools are measured. School Performance Grades really have done nothing but show the effects of poverty. School report cards carry data that is compiled and aggregated by secret algorithms, and teacher evaluation procedures have morphed more times than a strain of the flu.

If test scores truly dictated the effectiveness of schools, then everyone in Raleigh in a position to affect policy should take the tests and see how they fare. If continuing to siphon taxpayer money into reforms that have not shown any empirical data of student improvement is still done, then those who push those reforms should be evaluated.

So much goes into what makes a public school effective, and yes, there are some glaring shortcomings in our schools, but when the very people who control the environment in which schools can operate make much noise about how our schools are failing us, then they might need to look in the mirror to identify the problem.

Because in so many ways our schools are really succeeding despite those who want to reform them.