A little over three years ago, an extended editorial appeared in newspapers across North Carolina concerning public education. I happened to read it in the Winston-Salem Journal.

It was written by Walter McDowell, a board member of BEST NC. McDowell, a former executive with Wachovia, talked of the dire need to transform education in North Carolina. And just to clarify, there are many who will always say that we “need to transform” education. You can read that op-ed here:  http://www.journalnow.com/opinion/columnists/walter-mcdowell-n-c-budget-a-missed-opportunity-to-transform/article_38dd2903-b54c-57aa-a47f-fa82aea992b7.html.

In short, McDowell told the state it had a huge problem and that his consortium, BEST NC, was mapping a way for our transformation. He called it “Excellence: North Carolina’s Education Vision.”

“Recently, Excellence: North Carolina’s Education Vision was launched. It was developed with input and collaboration from education, business and policy leaders from across the state. Excellence outlines a shared vision to make North Carolina’s education system the best in the nation by 2030.

Inspired by this vision and the important work of our educators, the 115 business leaders who compose BEST NC will continue to work with the education community, the governor and the General Assembly on high-yield investments and systemic strategies that will dramatically improve students’ educational experiences in our state. It is our hope that our elected leaders see from this report that elevating educators must be at the top of the list in those discussions.”

It is always nice to think that we educators are being “lifted” in the eyes of the public, but McDowell used as one of the measures to qualify our state’s dire circumstances the state’s average ACT scores.

“Then, shortly before the budget passed, North Carolina received news that we are still last in the nation in college and career readiness as measured by the ACT exam. There could be no greater urgency in North Carolina than solving this education crisis.”

I responded to McDowell’s argument with a rebuttal. It was published in the 10/17/15 edition of the Winston-Salem Journal. Specifically, I responded to the use of the ACT as the barometer of the entire health of the NC education system. I argued,

“North Carolina is one of only 13 states (in 2015 – in 2017 it was around 17) that requires all students (EC, LEP, etc.) to take that exam, which has no impact on their transcripts, provides no feedback in its scores on how to improve student achievement and is administered on a school day on which other activities and classes take place. Most states only have paying students take the ACT on a Saturday; those students have an investment in the results, hence higher scores” (http://www.journalnow.com/opinion/columnists/stuart-egan-judging-schools-by-an-unfair-standard/article_0aa55234-8b82-5713-8114-65bc43e80eb1.html).

In fact, last school year, the ACT was supposed to become the most “important test” that could be given in all of North Carolina high schools. That was thanks to CCRGAP, or the Career and College Ready Graduate Alignment Partnership.

It cannot be helped that taking out a “C” and the “G” from the acronym gives us “CRAP” was not noticed. 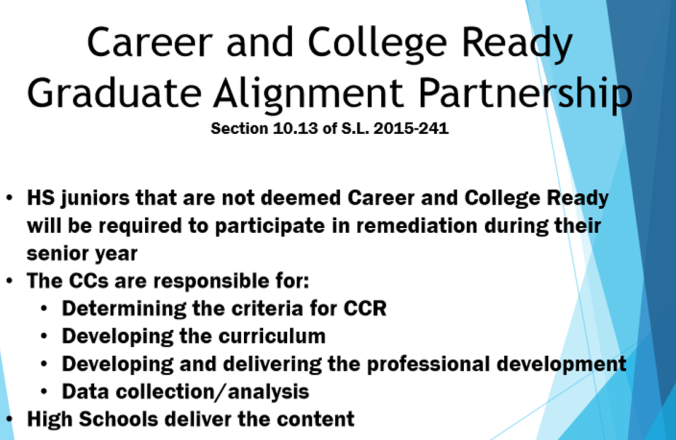 What that said was that if any high school junior did not make a certain score on the ACT (or its particular subject areas), then they must go through remediation during their senior year using a curriculum chosen/designed by a local community college but delivered by the high school teachers within already prescribed core courses.

In short, teachers would have had to take time in their already crowded and time-constrained classes to deliver more curriculum.  No extra time was to be given. Curriculum standards for the actual classes still had to be met. Why? Because there will be a test for them.

Ironically, it did not go “live” last school year maybe from lack of funds or lack of follow-through.

Debate over what scores were to be the threshold for whether a student had to be remediated was nebulous and rarely publicized. What was reported to this teacher in a professional development workshop in August of 2017 was the following:

If you don’t know how an ACT score is broken down, then: 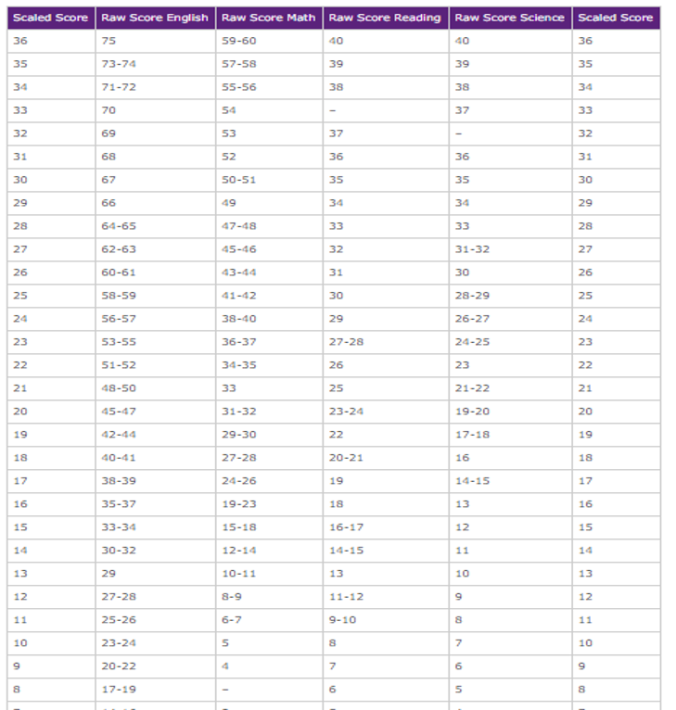 What CCGRAP (as told to my school system’s English teachers) said was that all students must get at least 40 or 41 of 75 questions on the English section correct and 26 of 40 questions correct on the language portion to avoid remediation.

I have not even mentioned what was to happen with math.

That’s a high bar for all students. I repeat, a high bar. If you do not think so, then take the test yourself in a controlled situation. For students in North Carolina public schools, that administration will happen on a school day when they have other classes. Of course, many will succeed, but we are talking ALL students.

However, according to some sources, students could have escaped remediation if they had a high enough GPA. But some administrators reported being told that it was not an “OR” but an “AND” when it pertains to ACT scores and GPA requirements.

Bottom line: the ACT has a lot of power over our students. It even affects a schools performance grade, which for high schools relies much more on scores of standardized tests than it does on growth.

Interestingly enough, State Superintendent Mark Johnson delivered an interview last year  with EdNC.org and WRAL in which he talked about “teaching high school students that college is not the only path to success” (https://www.ednc.org/2017/09/27/fighting-status-quo-inside-combative-world-ncs-new-public-schools-chief/).

But we were about to let the ACT, a college-ready testing tool, determine the lot of all students during their junior year. And this is the same Mark Johnson who talks about over-testing as well. 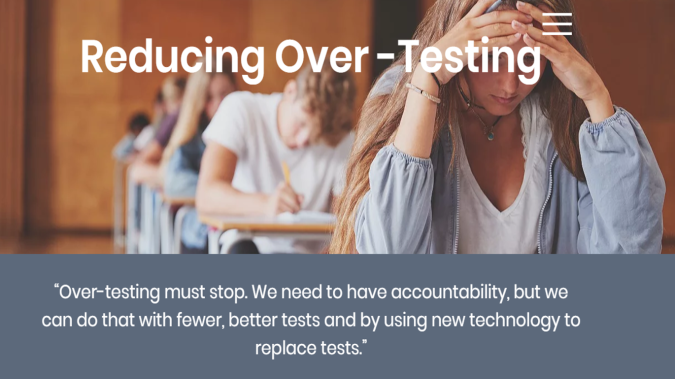 Yes, the ACT is considered a test of knowledge and how much a student has learned. But many studies do show that the ACT is as flawed in being concretely certain in a student’s ability to do well in college as the SAT (which students take if they want to). In fact, many studies show that grades and GPA are a better indicator than standardized tests. Here is some fodder on that: http://www.pbs.org/newshour/rundown/nail-biting-standardized-testing-may-miss-mark-college-students/.

Funny how SAT scores in North Carolina have risen in the past few years. 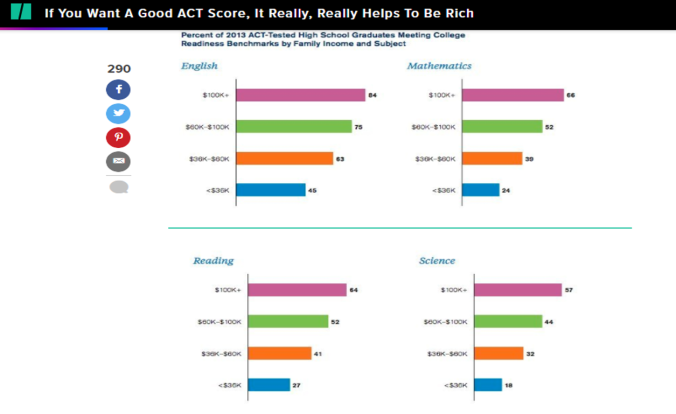 That’s from a Huffington Post report. Yes, it’s a left-leaning publication, but it is using only data points here that are really hard to refute (http://www.huffingtonpost.com/2014/07/18/act-score-family-income_n_5600065.html).

We have in NC another rather good indicator of the effect of poverty in public schools. It’s called the School Performance Grade. The correlation between schools that scored “D” or “F” and high poverty levels is astounding.

The state of North Carolina pays for the administration of the ACT to all high school juniors during valuable class time on a regular school day. That’s a lot of money going to ACT. Furthermore, classroom teachers are having to administer the ACT as well as play “catch-up” with students because of the missed class time.

And DPI had their budget slashed by the General Assembly. Oh, and we have lower per-pupil expenditures now than we did in the past when adjusted for inflation.

Those are not rhetorical questions.