When 500,000+ people in the state of North Carolina could have health insurance if North Carolina simply expanded Medicaid as so many other states already have, then you are dealing with a legislative body that is not interested in helping many stay healthy.

Medicaid expansion would be a great step in combating the forces of poverty with which over a fifth of our public school students fight against every day.

That’s why  ALL OUT ON MAY 1st is a critical event. The issue of expanding Medicaid is a focus of that day. And advocating for students is advocating for the very things that make students succeed optimally.

In October of 2016, the North Carolina Poverty Research Fund published a report entitled“Putting a Face on Medicaid Expansion in North Carolina.”

The title graphic literally explains it all. 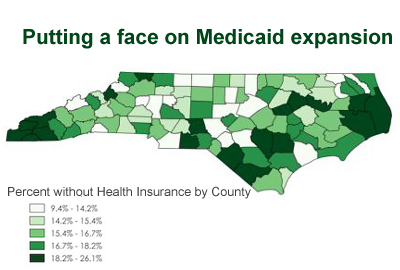 Look at that map closely and imagine transposing it on top of a map that shows the school performance grades on a state basis. In fact, you almost can.

EdNC.org released a new version of its Data Dashboard that allows users to filter for different variables when viewing data pertaining to NC’s school performance grades.

This is what this year’s performance grades look like when viewing them as plotted on a map of the state.

Look at that more closely.

And look at the numbers of student body percentages that received free & reduced lunches as correlated with the school performance grades.

No school that had 0 – 25% free and reduced lunch (low poverty) received a score of “D” of “F”. The other bars explain themselves.

Now look at that map of school performance grades right next to the map from the UNC report.

There is a strong correlation between the school performance grades and the percentages of uninsured people within each county.

The idea that we as a state cannot expand Medicaid is ludicrous. We as taxpayers already put money into the national coffers to pay for Medicaid . In fact, by not expanding Medicaid in this state is like not reclaiming federal tax dollars that we as North Carolinians already pay in the form of health insurance for hundreds of thousands of our fellow North Carolinians.

March with us on May 1st. Let Raleigh know we need all of our students as healthy as they can be.