Actually, that’s a not a rhetorical question.

Last year the NC Association of School Administrators issued a statement very much opposing the May 16th, 2018 rally by teachers and other public education supporters. 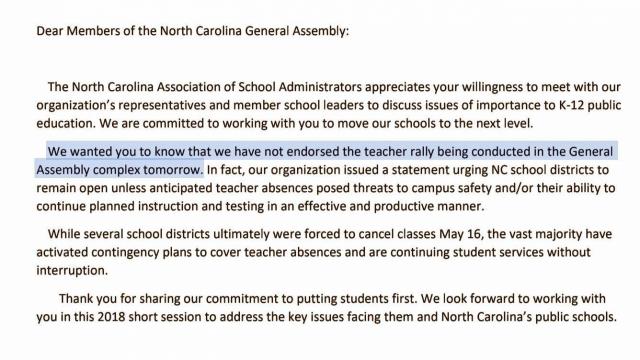 There were rumors of school administrators who told teachers to not participate in the May 16th rally and to take down any references to the march and rally from personal social media accounts. Whether those are isolated incidents or widespread, the fact that many teachers felt discouraged from speaking out on “a school day” is antithetical to one of the most important duties we as educators have: to advocate for students and students.

And there’s that First Amendment.

“Congress shall make no law respecting an establishment of religion, or prohibiting the free exercise thereof; or abridging the freedom of speech, or of the press; or the right of the people peaceably to assemble, and to petition the Government for a redress of grievances.” – First Amendment

In that one amendment is:

Those rights were exercised on May 16th, 2018 in Raleigh when thousands of teachers and school employees and advocates marched and rallied for public education in North Carolina. And those people who assembled at that march and rally were really quite peaceful.

After the march, WRAL ran a rather scathing editorial calling out school administrators on not overtly siding with teachers in their efforts to affect change for public schools. It referenced that exact letter from the NC Association of School Administrators to the General Assembly sent the day before the march and rally.

The editorial did not mince words.

“If the association had been doing its job, teachers wouldn’t have been left with no other choice but to RELUCTANTLY leave their classes to be heard in Raleigh. The letter is another example of a state association choosing to avoid confrontation with the legislative leadership, House Speaker Tim Moore and Senate leader Phil Berger. Everybody knows they only increase public school support when the public demands it.”

This is the same legislative leadership and NCGA that took away due-process rights from new teachers in 2014. That effectively instilled a fear of reprisal in newer teachers who may need to advocate for students and schools.

This is the same legislative leadership and NCGA that had a voter ID law declared unconstitutional because it targeted minorities and those in poverty in a state that is considered one of the most gerrymandered in the country.

Gerrymandering on the scale that was used these past few years and limiting those who can exercise right to vote is really akin to squashing people’s First Amendment rights.

The teachers who marched and rallied serve schools filled with students whose voices are compromised because of various reasons – lack of resources, discriminatory laws like HB2, lack of Medicaid expansion among others. Some of those students are Dreamers. Those are the same teachers going again on May 1st.

What the letter from the NC Association of School Administrators really stated was that it would not speak up for students and the very people who know them and their situations well: teachers.

No wonder May 16th was needed if just to give voice. Or rather free speech in a peaceful assembly to petition the state government to fully fund public schools as stipulated by the state constitution.

So, will they say the same this year, or will they support their public schools?