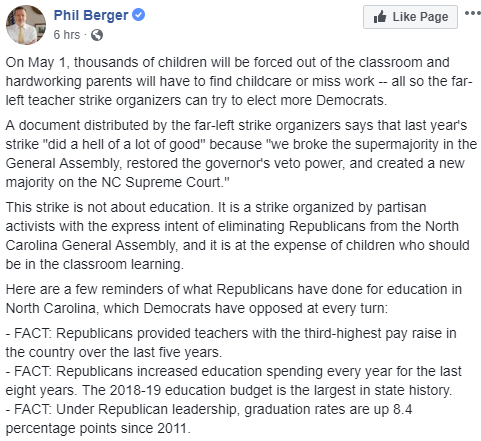 Throw in some hyperbole, hypocrisy, some healthy helpings of unfounded pathos, some either/or fallacy, and avoidance of what the May 1st march is actually about and you get this rather humorous missive by a man scared that the momentum gained from last year’s march is carrying on through this year’s May 1st rally.

All this coming from the man who passed a budget last summer through a nuclear option.

Other than fear of what teachers can collectively do, those “FACTS” at the bottom of his statement actually beg some more questions.

QUESTIONS ABOUT FACT #1: Are those “pay raises” actually based on “averages” or are they actual raises? Do they account for the removal of longevity pay and graduate degree pay? And does the latest salary schedule look like it could even sustain the current “average” salary as veteran teachers leave the profession?

The operative word here is “average” and Berger does not use it – intentionally. What GOP stalwarts purposefully fail to tell you is that most of the raises have occurred at the very low rungs of the salary schedule. Of course, you can raise the salary of first year teachers by a few thousand dollars and it would give them an average raise of maybe 10-15%. You would only have to give veteran teachers a very small raise funded by longevity pay (which we no longer get) and the OVERALL average raise still looks good, and not much money has to be invested.

“Average” does not mean “actual”. But it sounds great to those who don’t understand the math.

Consider the following table compiled by John deVille, NC public school activist and teacher veteran who has chronicled the various changes in educational policy for years. He tracked the recent teacher pay “increases” and used DATA-DRIVEN logic to show something rather interesting. 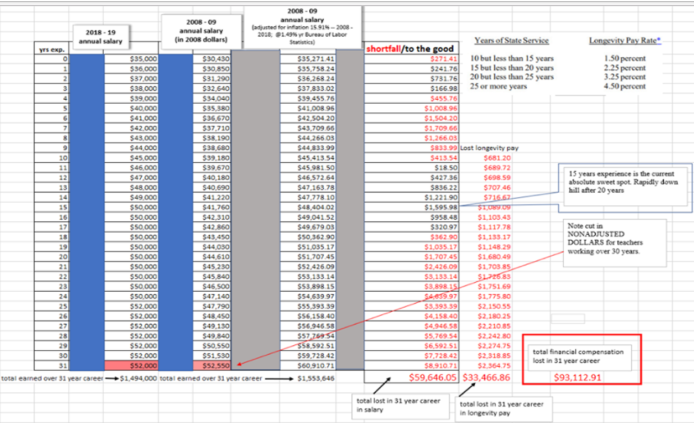 Also notice that the biggest shortfalls happen to veteran teachers. That not only affects take home pay, but also retirement because the average of the last four years helps to project pension

QUESTIONS ABOUT FACT #2: If education spending is at its highest, has it actually grown at the pace in which NC has grown? Have the average per-pupil expenditures caught up with pre-recession levels after adjusted for inflation?

Say in 2008, a school district had 1000 students in its school system and spent 10 million dollars in its budget to educate them. That’s a 10,000 per pupil expenditure. Now in 2018, that same district has 1500 students and the school system is spending 11.5 million to educate them. That district is spending more total dollars now than in 2008 on education, but the per-pupil expenditure has gone down –  significantly to over 2300 dollars per student or 23 percent.

What many in Raleigh want to pat themselves on the backs about is that we as a state are spending more on education than ever before. And that’s true. Just listen for the many examples to come from legislators looking to get reelected this year to the NC General Assembly yet passing a budget through a nuclear option to avoid having to answer questions about the facts.

What many in Raleigh may also want to pat themselves on the back about is how much of the state budget is spent on public education. It’s about 56% now.

But we are supposed to. It’s in our constitution.

QUESTIONS ABOUT FACT #3: Have graduation rates risen because of maybe the combination of more schools offering more classes while students have to pass fewer classes to obtain a diploma? Would that be increased by the move to all schools having a ten-point scale?

Along with “student test scores” and “student achievement,” “graduation rate” might be one of the most constantly redefined terms in public schools. Does it mean how many students graduate in four years? Five years? At least finish a GED program or a diploma in a community college? Actually, it depends on whom you ask and when you ask. But with the NC State Board of Education’s decision to go to a ten-point grading scale a few years ago (after 2011) in all high schools instead of the seven-point scale used in many districts, the odds of students passing courses dramatically increased because the bar to pass was set lower. That drastically affects graduation rates.

Add to that, it takes fewer credits to graduate  than it did years ago, and in many cases students are taking more classes to pass fewer credits because many systems have adopted the block schedule. In fact, most all high school teachers are teaching more classes and more kids because of removed class size caps and overcrowding in schools and altered schedules.

There is always more underneath. Berger does not want you to see that. And if he wants to talk about actions taken that are supposedly at the “expense of children,” then he might need to answer questions about Medicaid expansion, Gen X, Duke coal ash, HB2, gerrymandering, and the fact that over 20% of our public school “children” still live at or below the poverty level.

Until he does that, then his statement today is nothing but a statement of fear.

One thought on “About Sen. Phil “Begging the Question” Berger’s Fear-Based Post Concerning May 1st”