When Betsy DeVos became the Secretary of Education after a tie-breaking confirmation vote, she brought with her absolutely zero experience in public school education. In fact, her only “qualification” for the job was an agenda that rubber-stamps those who prop her up.

And there are striking similarities with our own state superintendent, Mark Johnson. While Johnson does have limited experience in the classroom, it seems next to nothing considering that he is the state’s highest ranking public education official. In fact, contrasting Mark Johnson and Betsy DeVos with a veteran teacher very much shows how unqualified both are for their positions and how similar they are to each other.

Furthermore, both Johnson and DeVos have a problem saying “no” to forces that seek to “reform” public education.

“I have decided to stop taking offense at the suggestion that we are buying influence. Now I simply concede the point. They are right. We do expect something in return. We expect to foster a conservative governing philosophy consisting of limited government and respect for traditional American virtues. We expect a return on our investment.” – Betsy DeVos, 1997.

“These are things I have learned from my own experience. If I disagree with the policy, I’m not afraid to say ‘no’ to anyone who gave me money.” –Mark Johnson, 2017.

DeVos is well known for advancing “reforms” involved with school choice, vouchers, and charter schools. In fact, she has given large amounts of money to causes that champion those reforms. And Johnson is someone who actually can’t say “no” despite what he said above.

When DPI’s budget was cut by the very General Assembly that extendied him unchecked power over the public school system, did Mark Johnson say, “No?”

When he said that “local leaders know what we need” for their local schools, did Mark Johnson tell the people pushing for charter takeover with an ISD, “No?”

Has there ever been a time where Mark Johnson has openly said “No!” to any of the very lawmakers whom he says he might have a disagreement with?

No, there has not been.

Has Mark Johnson ever told the General Assembly “No!” to taking more money out of the budget for public schools to place in a voucher program that has not yielded a positive outcome?

Has Mark Johnson ever publicly questioned the actions against teachers and the education profession by Phil Berger or Tim Moore?

Additionally, both DeVos and Johnson seem to attract large crowds of people who do not approve of their performance. DeVos literally has spent millions on security detail as “protection.”

And Johnson seems to leave town when lots of teachers come to talk about education. 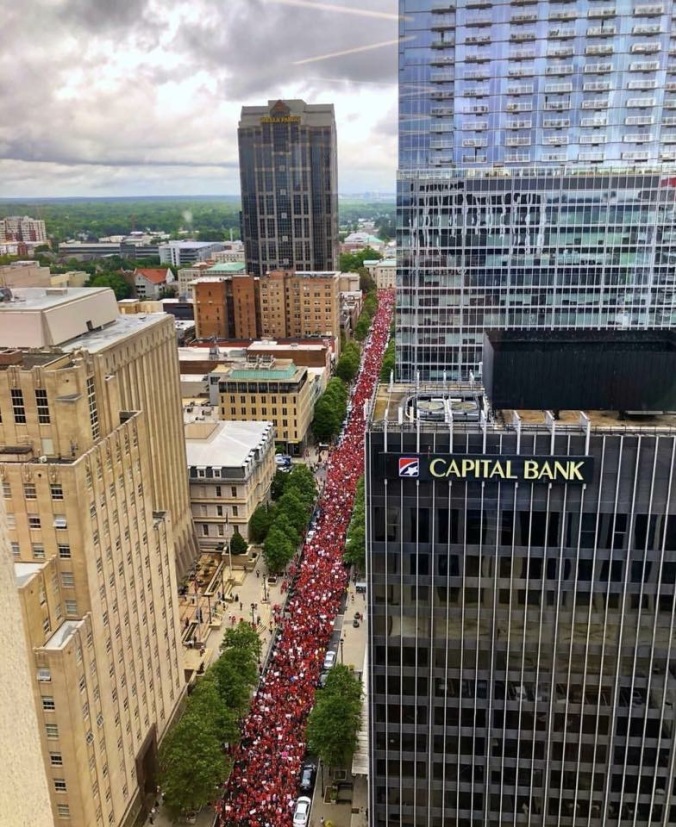 One thought on “Mark Johnson is Our Own Betsy DeVos”