“At DPI, we want to transform our education system to one that uses 21st century best practices so students and educators have access to unique learning experiences personalized for their individual needs and aspirations.” – Mark Johnson from “North Carolina Public Schools Accelerating into 2018” in December of 2017 on EdNC.org.

In 2018 we saw a reduction in budget and a reorganization at DPI.

And iPads. Six million dollars worth.

And hurricanes along with an election cycle that saw a vteo-proof majority in both branches of the NCGA taken away from the very people who have been “crafting” education policy for years in North Carolina.

“New, personalized learning technology allows teachers to get the information they need about students’ progress without high-stakes testing. Especially in the early grades, progress checks can feel like a normal, engaging lesson instead of an examination. In many cases, students won’t even know we are checking in on their progress.” – Mark Johnson from “I’m mad as hell, and I’m not gonna test it anymore!” in January of 2019 on EdNC.org.

The term “personalized learning” has become a bit of a buzzword in North Carolina – a fashionable way to possibly veil an educational reform under the guise of something altruistic.

In its literal and denotative form, “personalized learning” is a rather noble concept. It would allow students to receive tailored-made lessons that match their learning styles, needs, and interests.

It also requires a great amount of time, resources, and PERSONAL attention from instructors.

Time, resources, classroom space, and opportunities to give each student personalized instruction are not items being afforded to North Carolina’s public school teachers. In fact, as state superintendent, Mark Johnson has never really advocated for those things in schools. Actually, he has passively allowed for the class size mandate to proceed without a fight, has never fought against the massive cuts to the Department of Public Instruction, and devotes more time hiring only loyalists and spending taxpayer money to fight against the state board.

And the fact that he is now starting to advocate for a statewide $1.9 billion bond seems more like trying to take credit for something that could have easily been on last November’s ballot when the party he affiliates himself with had the very supermajority to allow for it.

In November of 2017, Benjamin Herold of Education Week wrote an investigative article entitled “The Case(s) Against Personalized Learning.” It is a straightforward look at how the amorphous term of “personalized learning” has been used to actually advance agendas that really are not good for enhancing instruction. Specifically, he uses three arguments against “personalized learning.” They are:

If what Mark Johnson is trying to accomplish with his version of “personalized learning,” then does it not make sense that he would have to counter the arguments laid forth by Herold?

And why specifically counter those arguments now?

One of the many people whom Herold refers to is Alfie Kohn, a heavy-hitter in the world of educational thought. He quotes Kohn from his book, Schools Beyond Measure.

With a “revamped” website controlled by a software company like SAS that uses secret algorithms to show how well schools are performing on standardized tests which teachers don’t even help to write, Johnson’s idea of “personalized learning” in a state that still has a very low per-pupil expenditure lacks credibility.

Alfie Kohn’s work as an author and critic is known the world over. In fact, his book The Homework Myth is one of the choice reads for my AP English Language and Composition classes (which ironically argues against the veracity of AP classes in general).

In February of 2015, Kohn wrote an entry in his blog entitled “Four Reasons to Worry About ‘Personalized Learning.’” In it he outlined four warning signs:

1. The tasks have been personalized for kids, not created by them.
2. Education is about the transmission of bits of information, not the construction of meaning.
3. The main objective is just to raise test scores.
4. It’s all about the tech.

I believe Kohn more than I believe Johnson. In fact, Kohn actually shows his research if you look at the actual post (http://www.alfiekohn.org/blogs/personalized/). Footnotes galore and a bibliography at the conclusion. 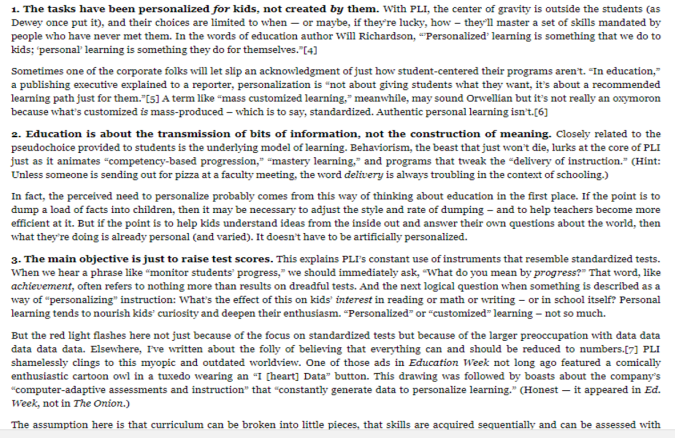 Until Mark Johnson is able to communicate clearly, candidly, and convincingly how his vision and/or version of “personalized instruction” is going to allow teachers to give all students more individualized attention, then what he is selling is nothing more than a scheme to make a profit for someone else.

Johnson states further in his December 2017 op-ed in EdNC.org,

“Our society uses technology to personalize our news, social media, entertainment options, and even fast-food orders.”

We live in a country where we have a president who trashes most news outlets, where social media companies seem to be more concerned with accruing data to sell for a profit, where entertainment makes us question what actually is reality, and where fast food offers cheap non-alternatives for substantial dietary options from a prefab menu (but great for entertaining college football’s national champions.

And Johnson wants us to rely on their examples to personalize how we teach our students?

Kohn also uses a fast-food reference in his post on personalized learning. But Kohn makes a better choice for the palate of the American education system.

“For some time, corporations have sold mass-produced commodities of questionable value and then permitted us to customize peripheral details to suit our “preferences.” In the 1970s, Burger King rolled out its “Have it your way!” campaign, announcing that we were now empowered to request a recently thawed slab of factory-produced ground meat without the usual pickle — or even with extra lettuce! In America, I can be me!”

But first I might order some “specificity” as an appetizer.