It’s July 4th and with it comes good more wishes from our state superintendent full of platitudes. 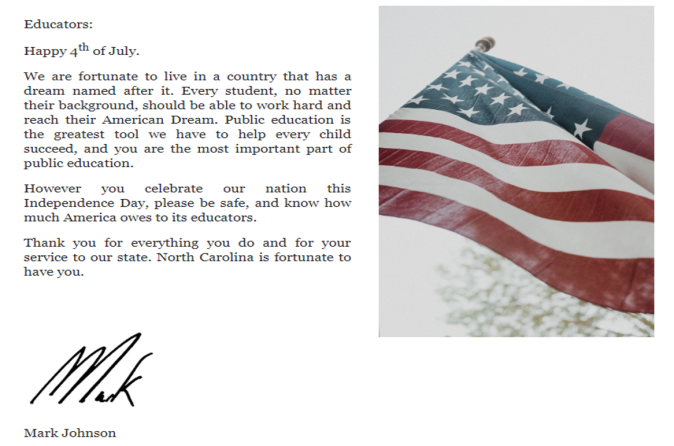 And this year, we educators and parents alike were sent this message through email: 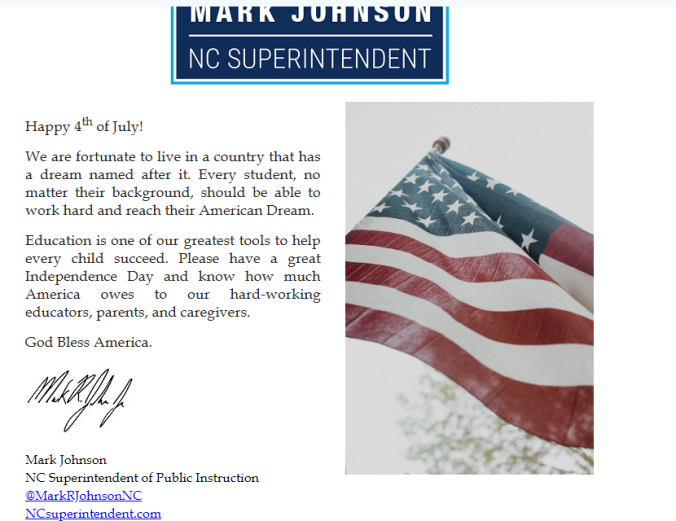 It’s that blind, vague reference to the “American Dream” he opens this feel-good letter with that reminds me of the disconnect that he has with what is really happening with our students.

While running for office, Johnson penned an op-ed entitled “Our American Dream” in which he talked about his rather nebulous concept of the “American Dream.”

“We are blessed beyond measure to be citizens of the United States, the only nation ever to have a dream named after it. No matter who you are, your background, your neighborhood, or your race; you should be able to go to school, work hard, and reach your American Dream.”

Yet, I have yet to hear how Johnson plans on confronting the poverty that afflicts so many in our state when he champions a school performance grading system that literally shows the effects of poverty on student outcomes. Over %20 of our children in NC live at the or below the poverty level.

I have yet to hear dialogue with Johnson on the advancement of wrap around services in schools to help students who struggle to get essential services and resources to prepare them for school.

I have yet to hear any advocacy on Johnson’s part to extend Medicaid to help keep some of our students’ families healthy when health costs are so high.

I have yet to hear or see Johnson fight for higher per-pupil expenditures.

I have yet to see Johnson confront the NC General Assembly on funding issues for DPI that help low-income districts get the professional development they could very much use to help teach students who face socioeconomic stresses.

I have not heard anything about increased mental-health services in schools from Johnson.

I have not heard Johnson defend the students who are “Dreamers” or who have been affected by the increased actions of ICE within North Carolina.

I have yet to hear how Johnson uses the democratic process in his decision-making to spend budgetary resources (iStation, Class Wallet, iPads, etc.).

When I talk to students from various backgrounds, their concept of what the  “American Dream” is to them is far different than the rose-colored version Johnson amorphously purports. That’s because for many of our students, the idea of someone else’s version of the “American Dream” never aligns with the actuality of their “American Reality.”

That’s the deliberate disconnect that Johnson has.