Read to Achieve has been deemed a failure – not because of the teachers, students, or schools involved, but because of implementation and its failure to boost support for Pre-K through second grades.

Phil Berger was the champion of Read to Achieve being created in NC, and please do not forget that the iStation debacle has everything to do with Read to Achieve.

Mark Johnson’s unilateral move to award iStation the contract over mClass against the recommendation of a committee certainly has raised a lot of concern which has been discussed on the national level and has prompted legislative action in the NC General Assembly. And now the relationship between the iStation contract and Phil Berger’s office needs to be looked at.

First, ask yourself this question: Do you honestly think that Mark Johnson acted on the iStation contract without Phil Berger’s consent or input?

Remember the special session in late 2016 that gave us HB17? With that Mark Johnson became the most enabled incoming state superintendent in state history. He gained powers that even his predecessor did not possess the magnitude of.

DPI ended up getting reorganized. The State Board of Education got less control over the state’s public school system. Phil Berger got his puppet.

With less than two calendar years in the classroom and no experience in running a department, Mark Johnson assumed an office for which he was not prepared for, and he certainly has not shown any ability to confront lawmakers over issues that affect public schools.

If he has then please name one.

And the structure of how DPI worked became siloed and bottlenecked at Johnson’s office. Rather, DPI started getting steered through the office of whomever Johnson answered to.

This public school-advocate firmly believes that is Phil Berger.

Yesterday, NC Senate Democrats sent a request to Sen. Berger to open an investigation into the iStation contract. 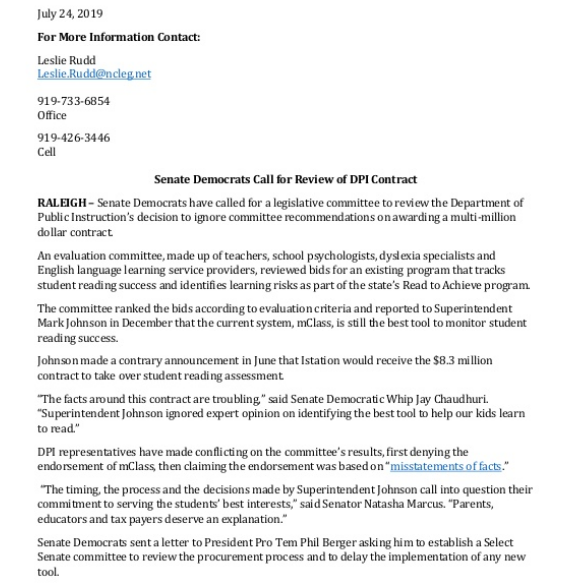 They just threw the metaphorical ball into Berger’s court. How he plays his next move might be one of the first times that he has a situation in recent memory that may not play out well for him.

He could open an investigation which in and of itself would be a small vote of no-confidence in Mark Johnson. Results of that investigation (because Berger could control who actually runs it) may conclude that there was an error which would look bad for Johnson , or it could find that there was no error which could indicate two things: Berger is complicit in iStation’s contract approval and that Mark Johnson is the most enabled man in NC (which would give every opponent in the state superintendent’s race ample fuel to campaign).

Or, he could not open an investigation and simply remove all doubt that he is complicit.

A couple of days ago, the NC House gave a rousing vote of no-confidence to Mark Johnson’s actions to award iStation a contract. From the N&O:

Amid a growing statewide controversy, some state lawmakers want North Carolina school districts to be able to keep how they test the reading skills of their youngest students.

State Superintendent Mark Johnson picked the computer-based Istation program for a three-year, $8.3 million contract to test K-3 students under the Read To Achieve program. But the N.C. House passed a bill Monday night that would let schools use a different program to test students, which includes the Amplify mClass program that has been used since 2013.

Of course, that bill did not pass the NC Senate which is run by Phil Berger.

So, will Berger open the investigation and let it run without interference?

And no matter what he does, it will speak a lot.