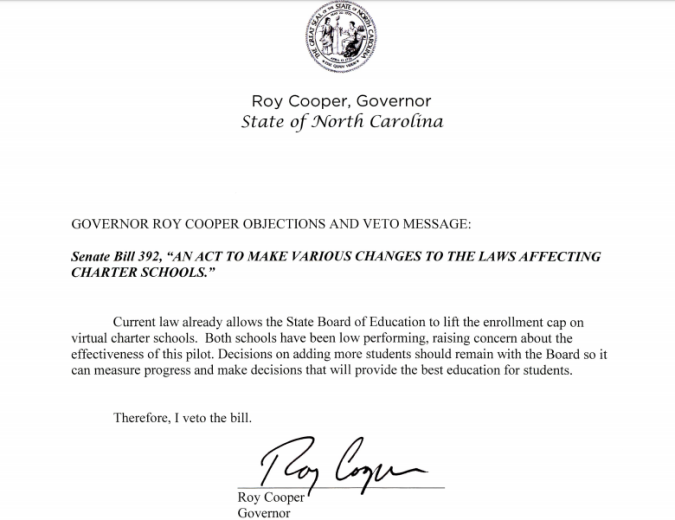 The text of the official veto declaration says it all.

There are two virtual charters in North Carolina.

Remember last September when State Superintendent Mark Johnson was again bemoaning the “status quo.” He said, “When you use status quo strategies, you get status quo results.” 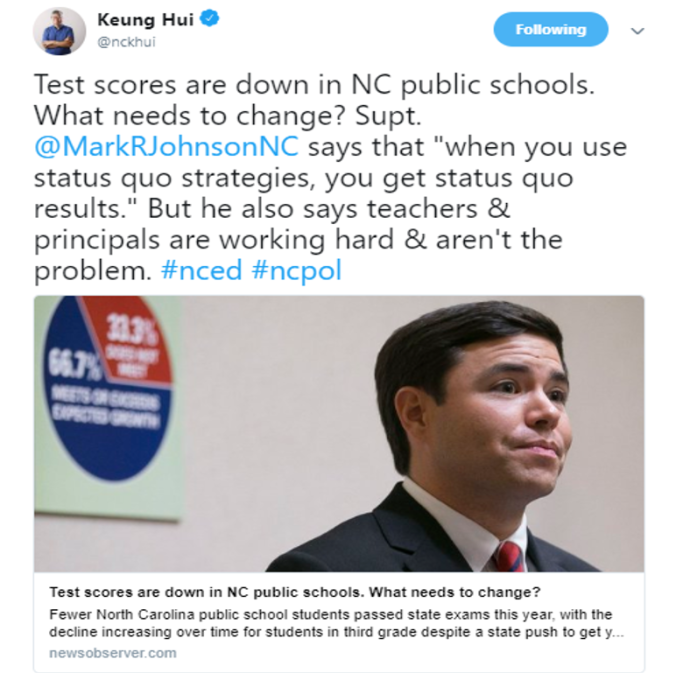 Did Johnson make that applicable to the virtual charter schools that have repeatedly under-performed here in NC?

Statewide test results released last week show that N.C. Connections Academy and N.C. Virtual Academy received D grades for their academic performance for the 2017-18 school year. It’s the third year in a row that both public schools have gotten a D and also failed to meet academic growth expectations on state tests, putting them on the state’s list of “continually low-performing schools” .

That’s sounds just like what Mark Johnson was talking about when he made reference to the “status quo.”

But instead of calling it what it was, Johnson actually expressed enthusiasm for them.

Even in a Sept. 2018 press conference on the school performance grades Johnson expressed “excitement” for the work these two charter virtual schools are doing.

That “status quo” he talked about above when speaking about the overall public school system performance? It doesn’t apply here obviously.

He excused the performance of the two virtual charters on their unique population. But Johnson as the top official in public school in North Carolina should know that every school deals with a population that needs a little extra help sometimes. In fact, every school deals many populations. Every school: elementary, middle, high school, magnet.

And every school needs a little extra help sometimes. Every school.

But why are these two virtual charter schools given a constant “pass” when it comes to performance when the state super keeps speaking tough on the performance of traditional schools? In fact, “state lawmakers showed their support for the two schools last summer by passing legislation to let them stay open until at least 2023.”

And now they wanted to expand their capacity without the State Board’s consent.

K12 Inc. and Pearson are receiving money to run two low-performing virtual charters when the state public school system actually has a successful online school running. Why would Mark Johnson express such enthusiasm for those two privately run virtual charters?

Just ask him and see if he actually answers the question.

I have an idea what the real answer is.