This week the Wall Street Journal printed an op-ed by Baker Mitchell, the founder of the Roger Bacon Academies four of  which are classified as “public” charter schools in North Carolina.

Simply put, when considering the context in which these schools operate, the actual student body makeup compared to other geographically close schools, and Mitchell’s loyalty to privatization efforts in North Carolina of public education, then it is easy to see how baseless an argument he has.

Here is the text:

With a new school year ahead, the attacks on charter schools have begun anew. In North Carolina we’re hearing outrageous charges of racism. A public-television commentator claimed recently that “resegregation” was the purpose of charter schools “from the start.”

Meanwhile, parents are voting with their feet. Statewide enrollment in traditional public schools has declined four years in a row. Less than 80% of K-12 students now attend district schools. More than 110,000 are enrolled in charters and 100,000 in private schools. More than 140,000 are being home-schooled.

The suggestion that district schools are being resegregated through “white flight” to schools of choice is nonsense. North Carolina charters today have a slightly higher percentage of black students (26.1%) than district schools (25.2%). And those students aren’t assigned. Parents choose our schools.

It’s “certainly no accident” that critics invoke the Jim Crow era by referring to “segregation,” Lindalyn Kakadelis of North Carolina Education Strategies told me. “The goal is to stop the growth of K-12 education options at any cost.” Charter school critics “do not want families making educational decisions for their children. The system does not want to lose control or money.”

Charges of racism are intended to divert attention from the failure of traditional public schools to educate minority children. According to the most recent Charter Schools Annual Report to the North Carolina General Assembly, published in February, charter-school students at virtually every grade level and in virtually all student subgroups—white, African-American, Hispanic, economically disadvantaged, students with disabilities, and students with limited English proficiency—outperformed traditional public-school students in English, math and science at the end of the school year. The sole exception was high-school math scores, where results were mixed.

The Roger Bacon Academy, which I founded in 1999, oversees four charter schools in southeastern North Carolina that are among the top-performing in their communities. All four schools are Title 1 schools, meaning 40% or more of the students come from lower-income households. One of the schools, Frederick Douglass Academy in downtown Wilmington, is a majority-minority school.

We succeed where others fail because we do things differently. Our classical curriculum, direct-instruction methods, additional instructional hours, and focus on orderliness are a proven formula for successful learning.

I never intended to get involved in education. But after selling a company I founded, I began volunteering as a science instructor at Houston-area elementary schools. I met Thaddeus Lott, principal of Wesley Elementary, a high-achieving school with a predominantly low-income black student body.

I pulled into the parking lot and noticed a 6-foot-high barbed-wire fence around the school. I quickly learned the problems were outside. The students were well-behaved and academically advanced. They read Shakespeare, learned phonics, and memorized multiplication tables. The results were so impressive that Houston school officials accused the school of cheating on tests—then forced the superintendent out when the charge was proved wrong.

Charter schools do not seek to replace traditional public schools, but rather to complement them, providing alternatives to the existing system. Our way is better for some students, not all. Let parents decide.

The “resegregation” attacks are a continuation of a broader smear campaign that began last year. Parents and policy makers shouldn’t be distracted. Charters are doing well—and if they don’t, they lose their charters and are shut down, unlike failing district schools.

First, let it be known that Baker Mitchell has a fairly long history here in North Carolina that’s not pretty and seems to be bent on making money.

From 2014 in a report from Lindsay Wagner for NC Policy Watch:

There was also a 2014 ProPublica report that stated:

Mitchell even caught the attention of John Merrow, the venerable education reporter.

And he also is involved with the North Carolina libertarian think tank, The John Locke Foundation, which is funded by Art Pope, who along with Mitchell is aligned with the Koch brothers. Pope was also the first budget director for Gov. Pat McCrory when he won office and crafted many of the financial details still governing school funding today and helped push many of the education reforms in NC.

What Mitchell talks about in his op-ed doesn’t reveal even a clear, cursory story and fails to go into detail. It’s literally opaque glossing.

He uses charged words like “racism.” In fact, he is trying to utilize talking points that many pro-charter school advocates in North Carolina are adopting to combat serious criticisms that have merit based on resegregating populations in NC. In fact, the Executive Director of the North Carolina Association of Public Charter Schools sent out such a list that Mitchell parrots. Those points are easily debunked.

But this part of Mitchell’s op-ed really needs clarification:

The Roger Bacon Academy, which I founded in 1999, oversees four charter schools in southeastern North Carolina that are among the top-performing in their communities. All four schools are Title 1 schools, meaning 40% or more of the students come from lower-income households. One of the schools, Frederick Douglass Academy in downtown Wilmington, is a majority-minority school.

These are the report card summaries of each of those schools.

Here is the Leland Charter Day School in Brunswick County. 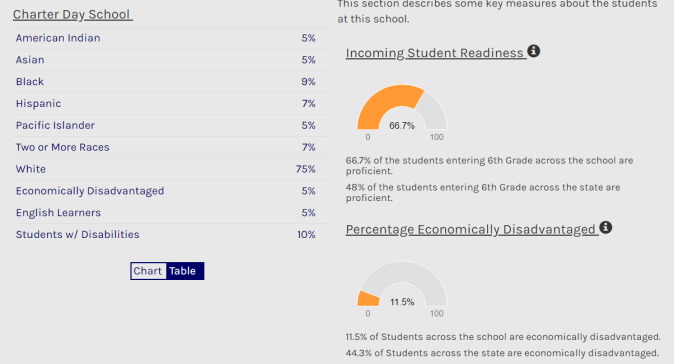 This is Columbus Charter School in Columbus County.

This is Douglass Academy in Wilmington (New Hanover County) which Mitchell highlights in his op-ed.

It would be really interesting to compare Mitchell’s schools with the schools in geographically close proximity on those same variables. In fact, the tables below show those differences for each school.

Percentages for student race race for traditional public schools schools were taken from Schooldigger.com as those numbers are not in the school report card outline for those schools.

Here is the comparison for Leland Charter Day School in Brunswick County.

Just look at the differences in the numbers of white students and economically disadvantaged students in the charter school compared to the two closest traditional schools geographically.

Here is the comparison for Columbus Charter School in Columbus County.

Here is the comparison for Douglass Charter School in New Hanover County.

Performance Grade- wise these schools are very aligned. But Mitchell highlighted this school to show his commitment to minority students. But he never mentions the word “diversity.” And Douglass is NOT diverse. In fact, looking at those other two schools, there is much more diversity and more likely a very active ESL/ELL program.

Here is the comparison for South Brunswick Charter School in Brunswick County.

Baker Mitchell intentionally forgets to mention is in measuring his schools in North Carolina against those in the surrounding community.

Why? Because his narrative would fail horribly.

He fixates on one point and never fully explains the context. It would be nice if he clarified if he just was just looking at racial divisions or socio-economic divisions or income-levels. It actually would be nice to see how many of the students in his schools are considered students with disabilities.

This is what NC defines as “students with disabilities.”