Put aside the fact that Sen. Phil Berger seems to be “put off” by the fact that Gov. Cooper is playing hardball politics that Berger has been playing for his entire politial career.

Actually Berger really needs to get out a positive narrative with the recent decision on the gerrymandered maps in NC, a possible upset in the NC-09 election, a budge impasse, and a surplus he is holding hostage in the court of public opinion.

In what might be one of the biggest strokes of irony in recent memory,  Sen. Phil Berger , the most partisan man in the state, wrote an op-ed about how a certain legislative matter in Raleigh should not be a partisan issue.

Coming from a man who rammed through the budget vote in the summer of 2018 through committee rather than field amendments and debate.

Coming from a man who has orchestrated many a “special session” to pass legislation like HB17 and HB2 without opposition.

Coming from a man who was elected in a state that has unconstitutionally gerrymander voting districts.

Coming from a man who will not even hold a veto override vote on the budget because he doesn’t have enough votes.

That op-ed entitled “Childhood literacy shouldn’t be a partisan issue” is currently on EdNC.org.

“In October 2017, I asked my staff to dig into the underlying issues surrounding the implementation and progress of Read to Achieve, a program that I, together with others, championed to ensure that North Carolina’s students can read by the end of third grade. Data conclusively shows this is critical to a child’s future success in school and ultimately in life.”

And the data also concluded that the program was not working. In fact, it had the opposite effect.

He even bragged about the “bipartisan manner” in which the bill that Copper vetoed to overhaul RTA was conceived.

In the course of drafting and refining the bill, my office engaged the most bipartisan group of stakeholders that I have ever seen work on a single piece of legislation. Here are the people and organizations that we worked with:

I don’t believe that is as bipartisan as Berger may think or want you to beleive.

DPI is led by a Berger puppet in Johnson and after the reorg last summer and the turnover, most anyone who is in a leadership position at DPI is loyal to Berger’s platform.

Surry, Mount Airy, Stokes, and Caswell Counties are all in Berger’s district. 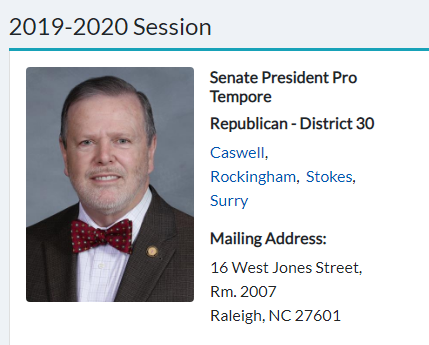 SAS is operated by Jim Goodnight, who donates much to the Republican party including 50K to Berger’s slush fund called the NC Senate Majority Fund.

Brock Womble was appointed by Phil Berger to his position.

Dr. Shue was hired at DPI by Mark Johnson himself.

Just review the last few years and see what Berger and his cronies have done to shape the UNC Board of Governors.

The Foundation for Excellence in Education was founded by Jeb Bush.

Henderson County is represented solely by republicans on the state level.

Pisgah Elementary is located in Candler, NC in Buncombe County. It is represented by Mark Meadows in Congress.

Peter Hans is the president of the NC Community College system. He is a frequent donor to republicans.

Classified positions on the UNC system staff are dictated by the State Human Resources Commission. Berger has something to do with that. From the UNC System Resources Page:

Of the fourteen people on Berger’s “bipartisan list” only four do not have strong ties to the republican party or initiatives championed by Berger.

Of the eleven entities, only one does not show representation or leadership that is rooted in the republican party.