“Since then (1996), charter schools, which will always be free and open to all, have offered exceptional student learning environments and created opportunities for all students nationwide — and especially in North Carolina. The facts speak for themselves; in three key metrics — student-family wellbeing, academic performance, and diversity — charter schools are a beacon.”

As far as academic achievement in charters is concerned, Ms. Dillingham can explain this in another op-ed (credit: Kris Nordstrom): 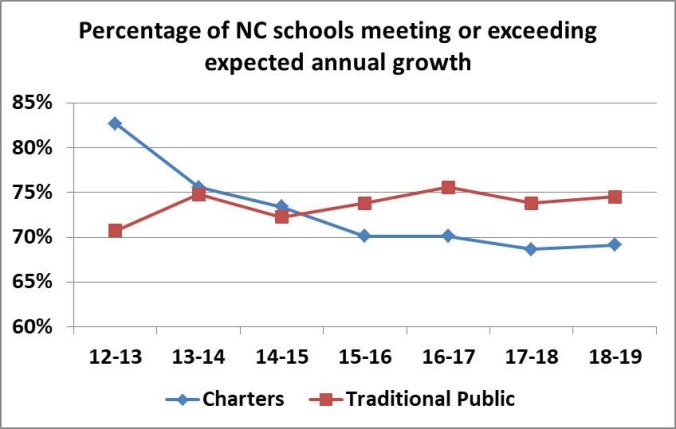 But it is the word “diversity” that will be the focus here.

Baker Mitchell of the Roger Bacon Academies made a similar argument in the Wall Street Journal a couple of weeks back. His outfit operates four of the charter schools in NC.

When considering the context in which his schools operate, the actual student body makeup compared to other geographically close schools, and Mitchell’s loyalty to privatization efforts in North Carolina of public education, then it is easy to see how baseless an argument he has.

Dillingham’s argument about how “diverse” NC’s charter schools are is about as baseless.

This is the breakdown of Pupil Membership By Race for NC over the last few years.

According to the NC State Report Cards for Schools, 44.3% of students across the state are economically disadvantaged.

The Excel spreadsheet that follows this post is a list of every charter school that exists now in this state that had a school performance grade attached to it for the 2018-2019 school year. It is cross-referenced to the last full school report card it has on record from the 2017-2018 school year.

That school report card has the breakdown of each charter school’s student body by race and economic disadvantage.

Please notice that “5%” is the lowest number allowed in a category. It could mean that there is anywhere from 0-5% in that given category.

In the Excel spreadsheet next to each school, these numbers are recorded in the order presented in the school report card for each of the 173 charter schools whose information is available.

(Column F – This Shows of it is a Title I School. Title I funds can be given to charter schools, albeit a different formula than traditional schools. All but 51 of the charters with student makeup info are Title I schools.
Column G – This is the number of days missed from hurricanes last school year.)

And remember that the average across the state for all schools in NC 2017-2018 was:

According to the data table below which includes 173 charter schools,

You will need to scroll to the right in the table to get all of the values.