Twenty-two years as a public school teacher and many more as a spectator in both small town venues and large urban stadiums (and a handful as a player), last Friday’s game between West Forsyth and East Forsyth was the best high school football game I have ever seen.

Sure, both teams’ undefeated seasons added to the heightened attention around the state. The fact that these two teams are rivals from opposite ends of the county only added more.

And these are two successful programs led by well-known coaches in a venue that could not any more people.

Of course, I am biased toward my school’s team. But I left feeling that both teams played “to win” the entire game and that might have been why it came down to the last play to decide who was leaving with the unblemished record. I also left with a lot of respect for the other side.

The weather. The bright almost full moon. The packed stands on both sides. The noise. The student sections. The bands. The big plays. The defensive stands. Two communities coming to watch their teams play.

And the acknowledgment that a “team” is more than the players and coaches themselves. 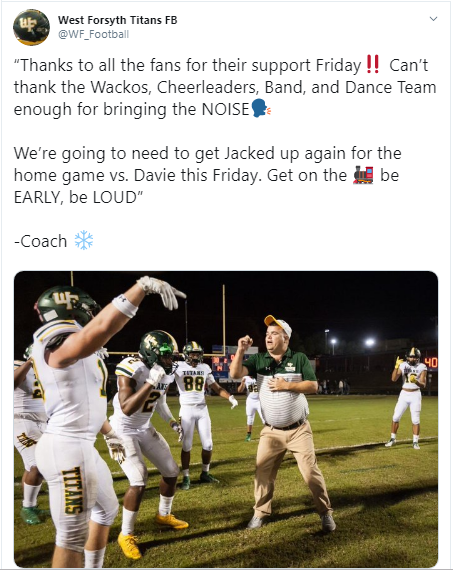 Makes one wish that some lawmakers in Raleigh saw a game like this to see how much public schools mean to their communities.

Go support your local high school teams wherever you are.