If you needed more proof that Sen. Phil Berger is using teachers as pawns in passing his version of the budget, then here it is.

Sen. Phil Berger issued a statement today that once again wrongly casts the current debacle over the budget squarely on the shoulders of Gov. Cooper. 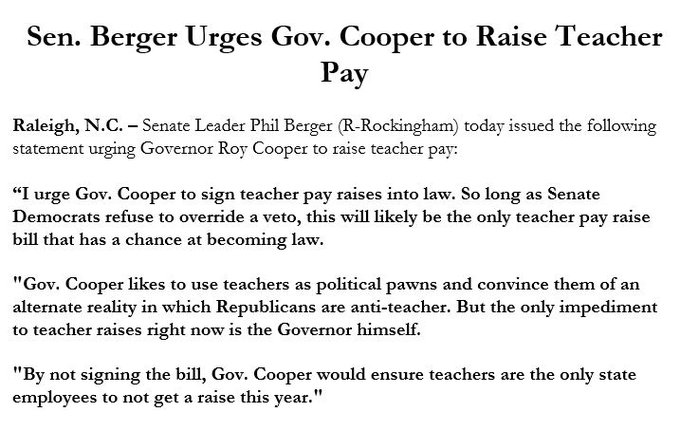 “This will likely be the only teacher pay raise bill that has a chance at becoming law.” Really? Of all the “mini-bills” that Berger has pushed through, he intentionally left out teacher pay? Of course he did.

“Gov. Cooper likes to use teachers as political pawns and convince them of an alternate reality in Republicans are anti-teacher.” Well, if Berger can convince this teacher that any of the following actions he and his cronies have taken are “pro-teacher,” then he is free to explain.

And that “By not signing the bill, Gov. Cooper would ensure that teachers are the only state employees to not get a raise this year” bit?

That’s some bullshit there. By making teachers the only state employees not to get a raise with all that has happened means that Berger made it so. Just to hold teachers hostage.

One thought on “More BS From Phil Berger Concerning Teachers”