You want to know why the North Carolina General Assembly is so dysfunctional?

Just look at the video below.

And the older man who speaks in response is Sen. Jerry Tillman.

Many public education advocates know Tillman. But for those who do not:

Sen. Jerry Tillman is a former teacher, coach, and administrator in public schools who retired long ago. Now is he one of the biggest champions of reforming the very public school system from which he gets his pension. Those reforms are not good for our public schools. They favor privatization and opaque transparency of charter schools.

He made that perfectly clear on Feb. 23rd, 2011, when he was shown on a video posted by Rob Schofield on the ncpolicywatch.org website fielding a question that expressed concern over whether lower-income kids could have equal chances to attend charter schools. His response was indicative of the exclusionary attitude he embraces.

Tillman was also  a primary sponsor for the Voting Reform Act in the 2013-2014 sessions, leading the charge to fight non-existent voter fraud in our state by fast-tracking a voter ID law that was purposefully constructed to keep many people’s voices from being heard, especially minority and low-income citizens.

That version of the Voter ID law was ruled unconstitutional.

And unlike a good teacher or a servant of the public, Tillman’s manner of debating hotly contested issues around public schools is the antithesis of what we really need in Raleigh. If you read Sen. Tillman’s comments from the June 16th, 2016 report by Alex Granados in EdNC.org,  you will see the strong-arm method of debate that is often used by the senator when he senses that others disagree with him.

Sen. Tom Apodaca, R-Buncombe, first said he wouldn’t vote for the bill because it didn’t extend to the way math is taught at the elementary school level, where he said damage was being done with the teaching methods currently being used.

“I’m not voting for this bill, because this bill doesn’t do enough,” he said.

Tillman fired back that if Apodaca wanted to be stuck with Common Core, not supporting his bill would make that happen.

“If you don’t like choice, and you want to be stuck with the June Atkinson/Bill Cobey Common Core, well that’s exactly what you’re going to get,” Tillman said.

June Atkinson is the state Superintendent, and Bill Cobey is the chair of the state Board of Education.

It seemed that according to Sen. Tillman,  Dr. Atkinson and Mr. Cobey invented Common Core.

That bill from 2016 concerning math tracks in high school would have required all high schools to offer two tracks of math  and presented an incredible challenge for schools to adequately teach those differing courses in high schools in such a quick amount of time – especially when the likes of Tillman keep funding from going to traditional public schools.

Sen. Tillman thought it could be done in the blink of an eye. He was quoted in an EdNC.org report,

“If you can teach math, your same certifications are required, same students, same allotment of teachers. Not gonna change,” he said.

Tillman said the practical aspect of teaching could be accomplished by having a teacher teach Algebra I alongside Math 1 in the same class.

Remember House Bill 334 from the summer of 2015? As reported on July 23rd of that summer in Lindsay Wagner’s news story entitled “Tillman’s bill impacts charter school oversight”, Tillman championed an amendment to that bill to place oversight of charter schools under the care of the State Board of Education and out of the Department of Public Instruction’s jurisdiction. That was when Dr. June Atkinson was the state superintendent. She would have made sure that charters would be overseen as much as possible. Today’s state super is not as keen on that transparency.

What House Bill 334 would have done was to allot more money on charters by creating a situation where Tillman could have protected them from checks and balances. It was a way for Tillman to fashion a favorable situation for new charter schools to not only operate more freely, but be less transparent.

The person he was talking to? Josh Stein, the current NC Attorney General. He’s considered a good lawyer.

“Committee Chair Jerry Tillman, a Republican who supports the measure, declared the “ayes” to have won the vote Friday, although to some listeners, the voice vote appeared to be evenly split or favoring the opposition.“

Tillman was going to make sure it would pass. That’s why there was a voice vote. And the oldest ears in the room declared a winner.

The measure being voted upon? The ASD which became the Innovative School District.

And then there’s Tillman’s steadfast allegiance to the virtual charter schools. The following is a tweet from T. Keung Hui today: 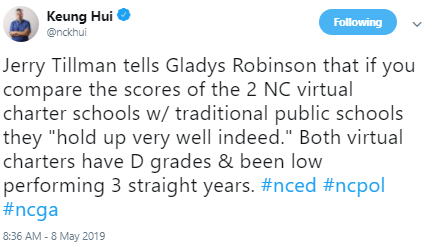 And Sen. Tillman co-chairs the Education Appropriations Committee for the NC General Assembly.

This man is not the legislator public schools deserve.