But it doesn’t change the fact that we still have a lame duck in the office of state superintendent for the next year. 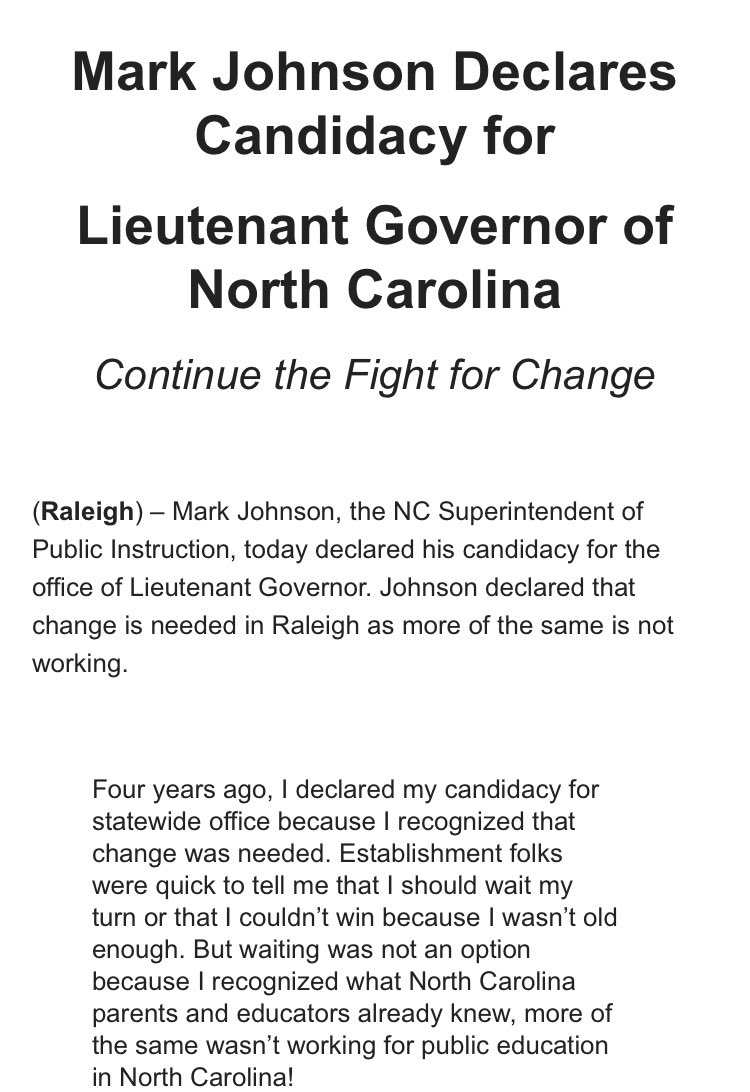 (Quotes are from the N&O)

“North Carolina deserves a leader who will fight to make all government more accountable, more efficient, and more transparent.”

Makes one think of the iStation contract and the purchase of those iPads.

“I’ve seen first-hand how bad state government can be. I’ve already been in the trenches fighting the deep state in state bureaucracy.”

Great, now he is talking about the “deep state” when his party controlled the governor’s mansion, had a supermajority in the NCGA for years, and actually had a State Board of Education when he was running for state super in 2016.

And the words” fight” and “Mark Johnson” have never collided in the same truthful sentence.

“…what’s best for the working families of North Carolina, not the Media Elites or Establishment Insiders.”

Which media elites? And aren’t the “Establishment Insiders” the very people who propped him up (HB17)?

Johnson referenced those fights in his campaign announcement, saying he’s had to fight against “Establishment Republicans and Democrats on the NC Board of Education” who’ve opposed his efforts to transform the state Department of Public Instruction.

Johnson didn’t fight. His handlers did. With taxpayer money. And it’s funny that Johnson calls others “Establishment” when at age 36 he is running for office the third time and each time was for a different office.

“NC DPI was a broken system focused more on protecting the Establishment’s status quo standards, tools, and strategies. They were content to stand in place rather than move forward.”

Actually DPI was not a broken system. It was simply handcuffed by the NCGA – you know, the “Establishment” that MJ wants you to think he’s fighting against but is really being a puppet for.

“North Carolina should be a 21st century leader, but we can’t do it with the relics of a 20th century bureaucracy. I want to take the fight to the next level. If you want more of the same, vote for someone else. If you want to continue the fight for change, vote Mark Johnson for Lieutenant Governor.”

And those changes that Johnson seems to talked glowingly about? Here they are.

He’s a professional “candidate” who claims to fight against the “Establishment.”

He is still a lame duck of an educational leader.

And I can’t wait to hear what DPI employees say about him when he is gone.