From the same person who helped orchestrate some of the most egregiously gerrymandering based on racial voting trends,

From the same person who championed a Voter ID law that mostly targets poor minorities to keep their vices from being heard in the democratic process,

From the same person who has blocked Medicaid expansion from so many in this state who could desperately use it when it would actually create economic growth for NC, comes this gem: 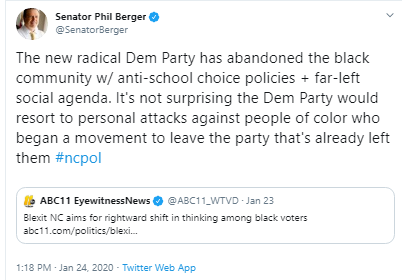 That movement he is referring to is “Blexit” started by Candace Owens.(One might want to read about her and some of the things she has said and aligns herself with. Oh, and tha Russian bot thing, too).