The last couple of years have proven that the Read to Achieve initiative championed by Phil Berger has failed to do what it was promoted to do. The recent iStation procurement scandals and the iPad purchasing debacle by Berger’s puppet Mark Johnson are just extensions of that still failing piece of “reform.”

Kris Nordstrom summed it up best from a report in January of 2019.

In October, researchers from NC State’s Friday Institute for Educational Innovation helped to confirm what many educational advocates have long claimed: North Carolina’s Read to Achieve program is a failure. This week’s State Board of Education meeting included a presentation on the evaluation, which served as an important wake-up call to North Carolina’s policymakers. However the evaluation – while rigorous and well-written – leaves many important questions unanswered.

The Read to Achieve program, created by the 2012 budget bill, is an effort to improve early-grades’ reading proficiency by refusing to promote students who fail the state’s third grade reading test. Read to Achieve was based on a similar initiative from Florida and was championed by Senator Phil Berger.

Based on one similar to Florida? Yep. A Jeb Bush model.

The General Assembly passed Read to Achieve legislation in 2012. It was modeled on literacy efforts in other states, including the “Just Read, Florida!” program created by former Gov. Jeb Bush in 2001.

Not surprising that this initiative was given so much “support” from Berger and others who share his political platform including Mark Johnson, the state superintendent who is most enabled by Sen. Berger.

But that’s not the only “reform” we borrowed from Jeb Bush and Florida and then disgustingly made our own. For those who are unaware, Jeb Bush is the overall architect and champion of a school performance grading system that NC models its program after. Those school performance grades are central to the school report card system that state superintendent Mark Johnson so eagerly wants to take ownership of.

And those school performance grades are helping advance a politically partisan effort to privatize the North Carolina public school system that is fully endorsed by Berger.

Those school performance grades place a lot of emphasis on achievement scores of amorphous, one-time testing rather than student growth throughout the entire year.

Read to Achieve is supposed to help our students read well by the end of third grade when they are given the first round of those major tests used to measure “achievement” – in fact, one of them is this:

That “achievement” measurement then goes into helping calculate those school performance grades.

Funny how an initiative borrowed from Florida and implemented in a way to literally fail students actually helps fuel another Jeb Bush-inspired reform that helps people like Berger create even more excuses to start more educational reforms.

And we still look to Jeb for “help.”

Like in June of 2018 when Johnson entertained Jeb Bush and a multitude of other politicians who have made it their job to privatize public education in North Carolina. 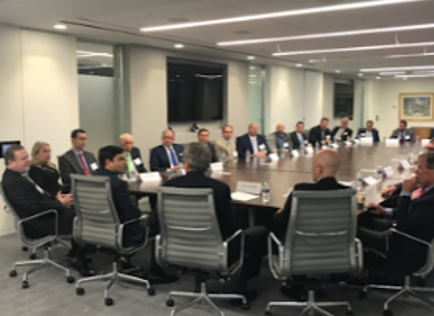 That same week Johnson laid off 40 people from the Department of Public Instruction due to a budget cut made by many lawmakers in the same room as Johnson and Bush in a year where the state supposedly had a surplus.

In that meeting Bush said,

“There are 50 state Senate presidents in the country,” Bush said to Senate President Pro Tempore Phil Berger, R-Rockingham, after the senator introduced him. “I can’t think of one who has done more for education reform than you” (https://www.ednc.org/2018/06/27/new-education-organization-brings-jeb-bush-to-town/).

What he should have said was, “I can’t think of anyone who has done more TO education through reform than you… except me.”

Realistically, the best thing Jeb Bush has ever done for public education in North Carolina is prove how much poverty affects our pubic school students’ ability to learn.

And just this week, Mark Johnson has thrown a “Hail Mary” in his fleeting chances to remain relevant in state government. From today’s News & Observer:

He never approached the State Board of Education about this. It seemed to come from nowhere. And it seems he is trying to stoke a base to get some sort of momentum in his bid to become the next Lt. Governor of NC, a bid that will not survive March’s primary according to polling and the fact that Johnson seems to not really have campaigned for the job. Later in the N&O report:

Johnson encouraged the state board to consider the example of Florida, which he said completely removed Common Core in its new standards.

“This is something where I hope we will be able to do a fulsome dive into our standards and review,” Johnson said at Thursday’s state board meeting. “And this time next year, if all goes according to plan for me as my plan has it, I’d like to be sitting here as lieutenant governor and actually have a vote on this board and vote for the new standards as well.”

Mention the words “Common Core” and it instantly polarizes people whether they understand what those standards really are or are not. But for Johnson to all of a sudden introduce this “Hail Mary” of a suggestion shows us his inability to 1) have an original thought about public education, 2) be nothing more than a puppet for failed educational reformers, and 3) to effectively use red herrings to divert attention from just how badly he has performed as the state’s top education official.