No, I was not invited to the “Dinner” exactly one year ago. I was at a school function with some incredibly talented students trying to raise money for the Drama Department to keep the arts vibrant in our school.

But many people shared quotes and there was a live stream video and, of course, Johnson likes to send emails. It keeps him from having to talk to teachers who are critical of his ineptitude. Here’s what he offered right before he went on stage. 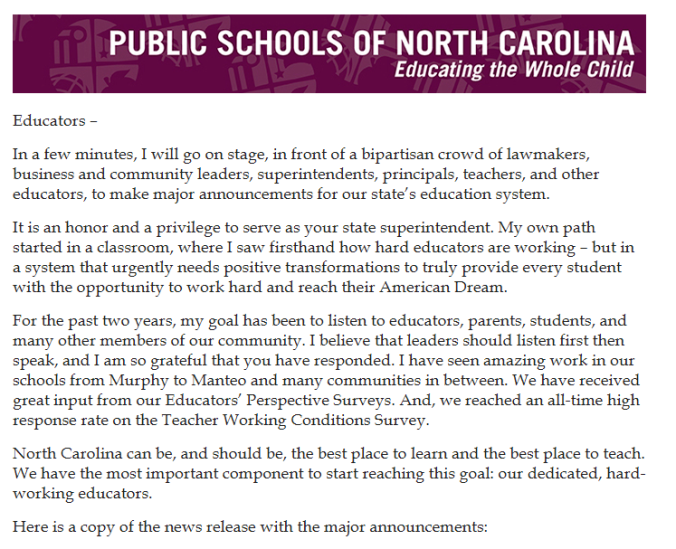 The first aspect of the video I noticed was that there were a LOT OF EMPTY SEATS. Why could those seats not have been filled with actual teachers? Johnson did call them the “most important components” in public education. It reminds one of what Johnson’s spokesperson, Drew Elliot, said in response to criticism of having not invited lots of teachers. He had said that “half” the room would be “educators.” I would like to know how many were actual teachers. And I know of TOY’s who were not invited.

Responding to criticism about the event being private, Elliot said 700 people will be there, as well as the news media.

“We can’t afford to rent out Panthers Stadium,” he said.

There were not 700 people there. That room would not have filled many press boxes at Panthers Stadium.

But it is the initiative of the #NC2030 – BEST PLACE TO LEARN / BEST PLACE TO TEACH that really was interesting here because the reason it cannot be #NC2020 is because of Johnson himself.

“Complacency is the antithesis of urgency. So I ask that we not be complacent, and act with urgency in anything that we do.”

Urgency? Two years later and a lavish dinner to a private audience to announce initiatives for public schools that supposedly are to help fix maladies that ail North Carolina’s public school system?

In his first two years as state super, Johnson had literally fought for NOTHING. He had been on the sidelines as a lawsuit over how much puppetry can be done through his office played out, conducted small listening tours, given cursory surveys, and eaten doughnuts.

Let it not be forgotten that NC had at one time before the Great Recession one of the most progressive and successful state school systems in the Southeast. Then a wave of ALEC inspired initiatives to “reform” education started to be put into place by the current powers in the NC General Assembly and we ended up here exactly one year ago.

To announce that it will take over ten years to get us back.

Johnson talked about the need to recruit and keep good teachers. Maybe that was a personal observation considering that he himself spent maybe two years combined training and actually teaching.

Johnson applauded that the average teacher salary was well over $50,000. It would have been nice to hear him explain how that can be sustained with the current salary schedule and the fact that that average is bolstered by those teachers who are veterans and have graduate degree pay which is no longer available to newer teachers.

Johnson said that NC needs to strive to be more like Massachusetts. Did he mean more like a state that produces senators like Elizabeth Warren, is almost as “blue” as any state in the country, that spends way more money on public education, and was the blueprint for the Affordable Care Act?

Johnson said that four devices are all that were needed to “personalize” education in a classroom. The main part of “personalize” is “person.”

And when he announced the TEACH NC initiative he named those who had partnered in it:

If you consider what DPI’s structure has been changed into with the appointment of a bunch of charter school champions, you could say that he has privatized that very entity to a large degree.

BESTNC is nothing more than a lobbying group with money that operates behind the scenes, does not engage teachers authentically, and was the architect of a horrible principal pay structure still under scrutiny today.

GATES? Nothing more need be said.

BELK & COASTAL? They don’t sound so “teacher” involved. They sound like money.

What Johnson announced with TEACH NC was another “business” driven reform for a public good.

The Wallace Foundation and the development of a Leadership Dashboard “to support their human capital strategies with real-time data?”

In other words, teachers just became data points even more.

How is that for personal?

And there was no talk at that dinner of how to combat the very things that impeded student achievement. No talk of poverty. No talk of the natural disasters that afflicted many school systems. No talk of expanding health care to students. No talk of how to change the fact that over %20 of our students live in poverty.

What happened that night was a yet another indication of the intentional disconnect that Johnson and his ilk have with what needs to be done with public education in NC.

in less than a month he could be sent out of Raleigh after his lame duck term.